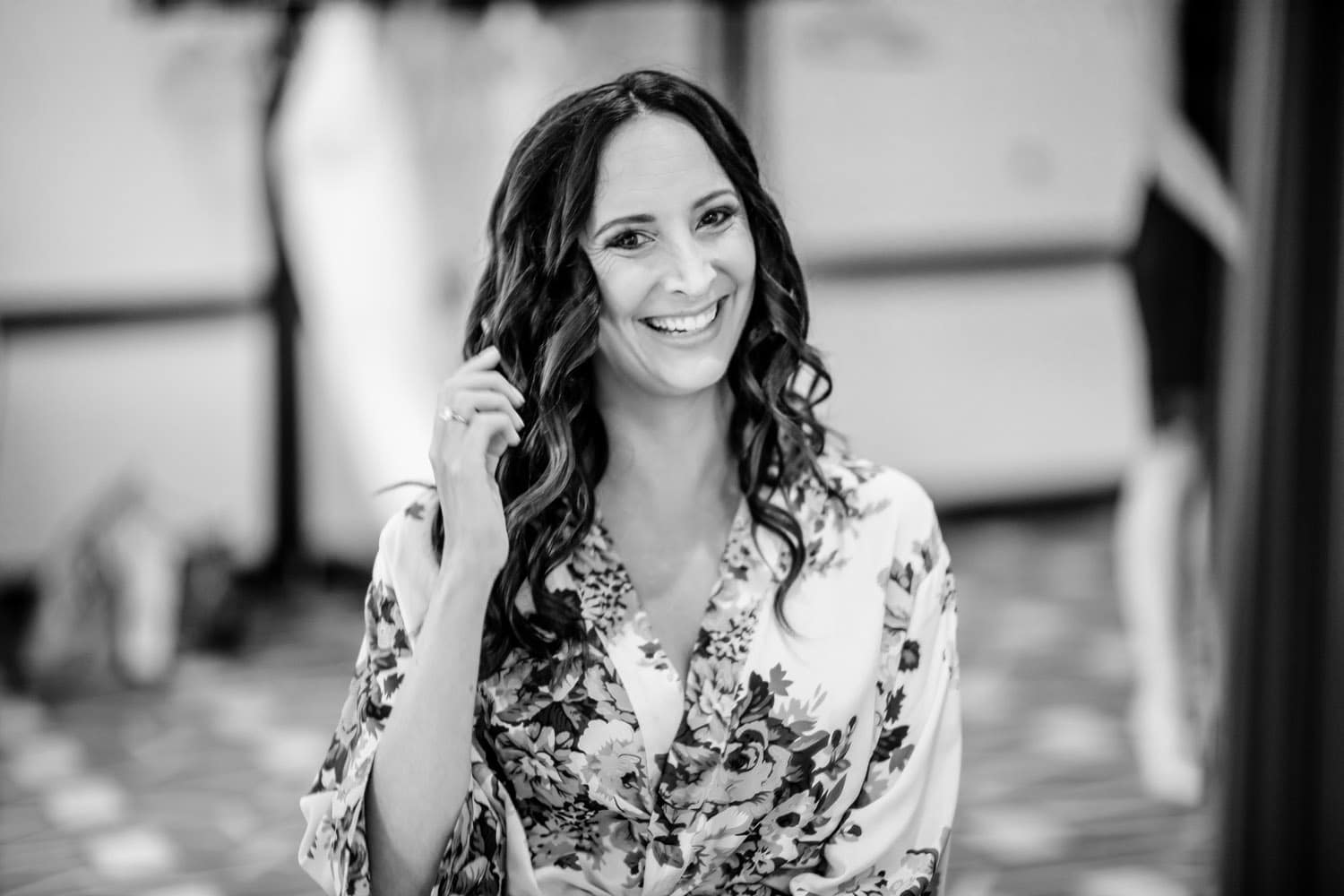 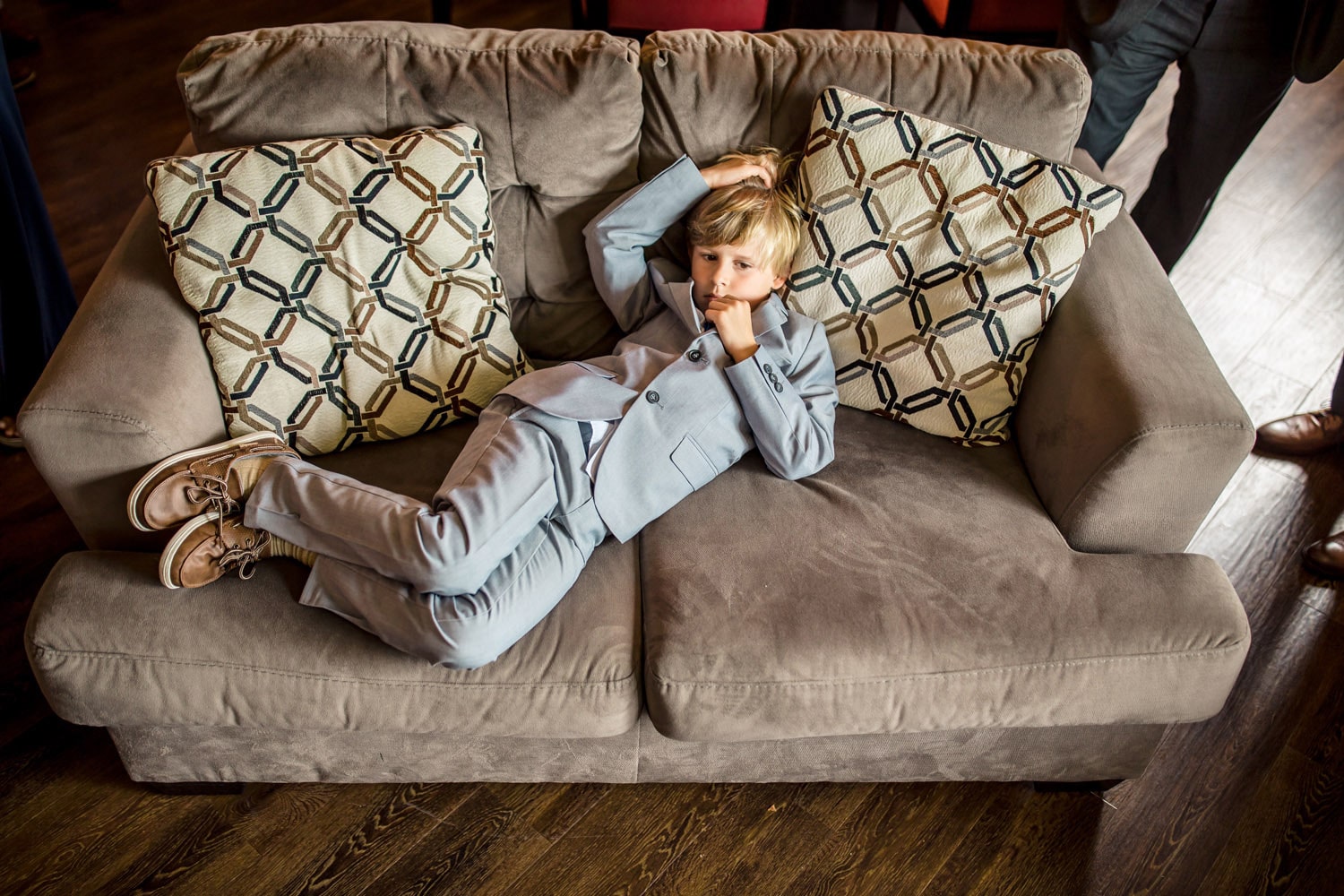 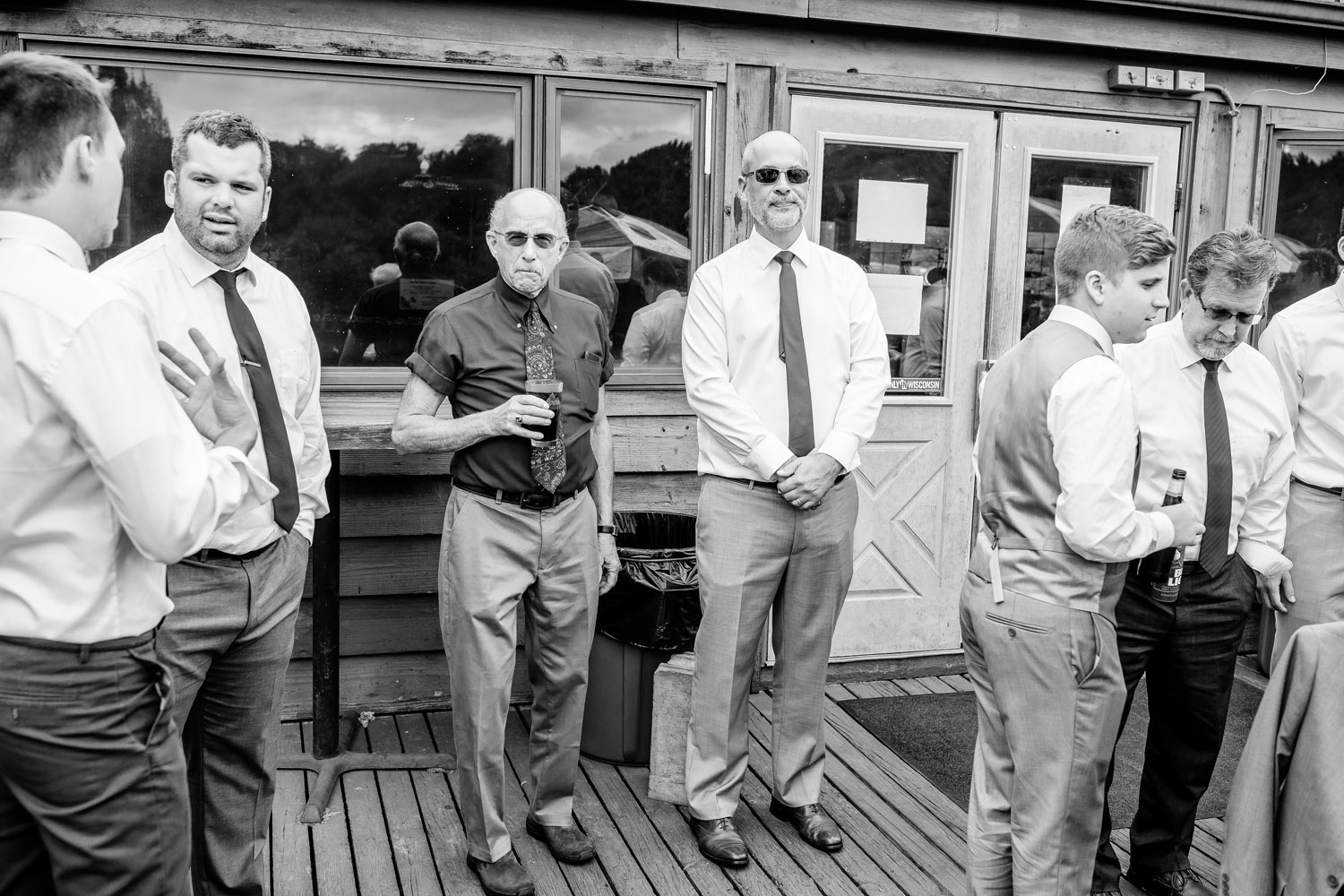 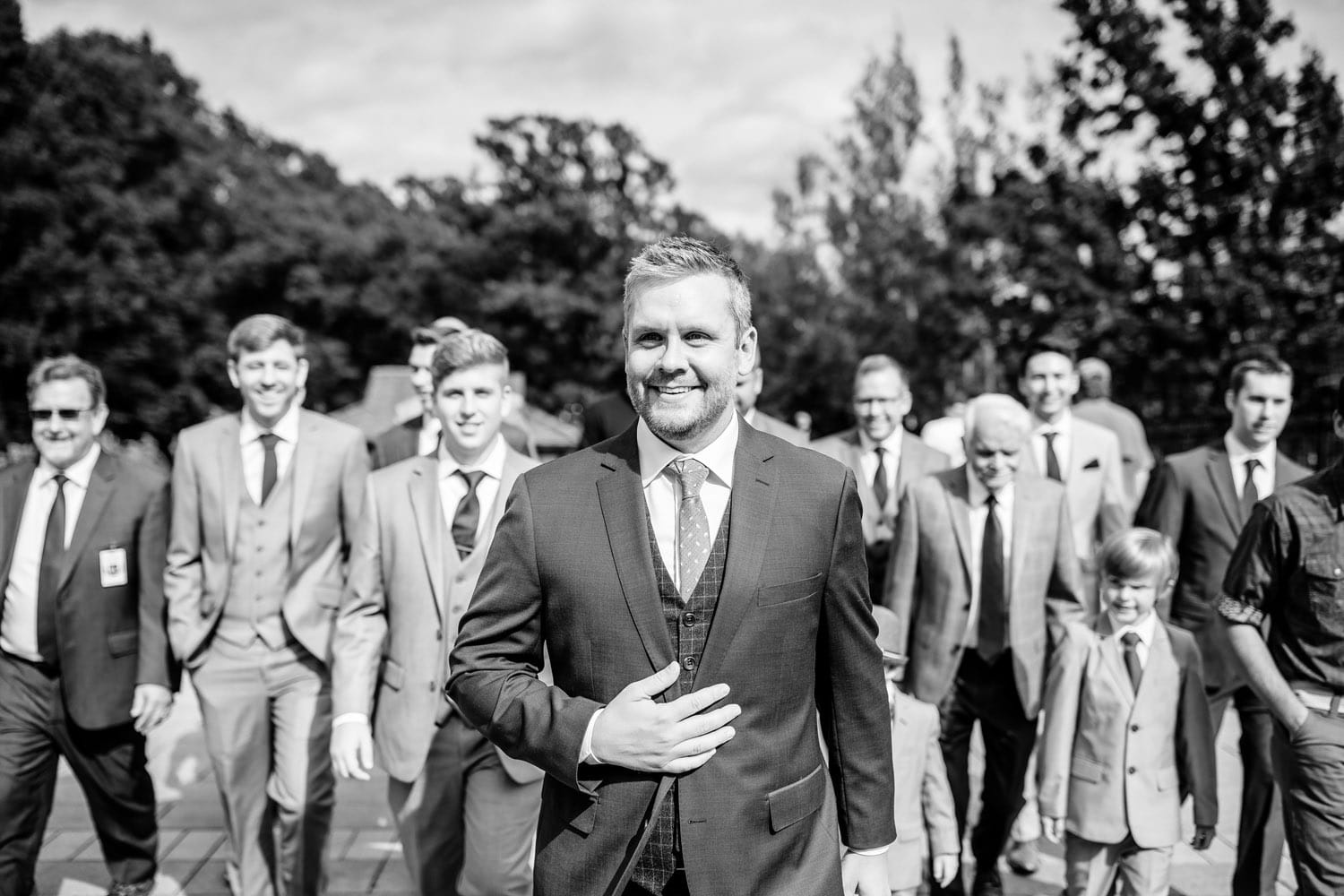 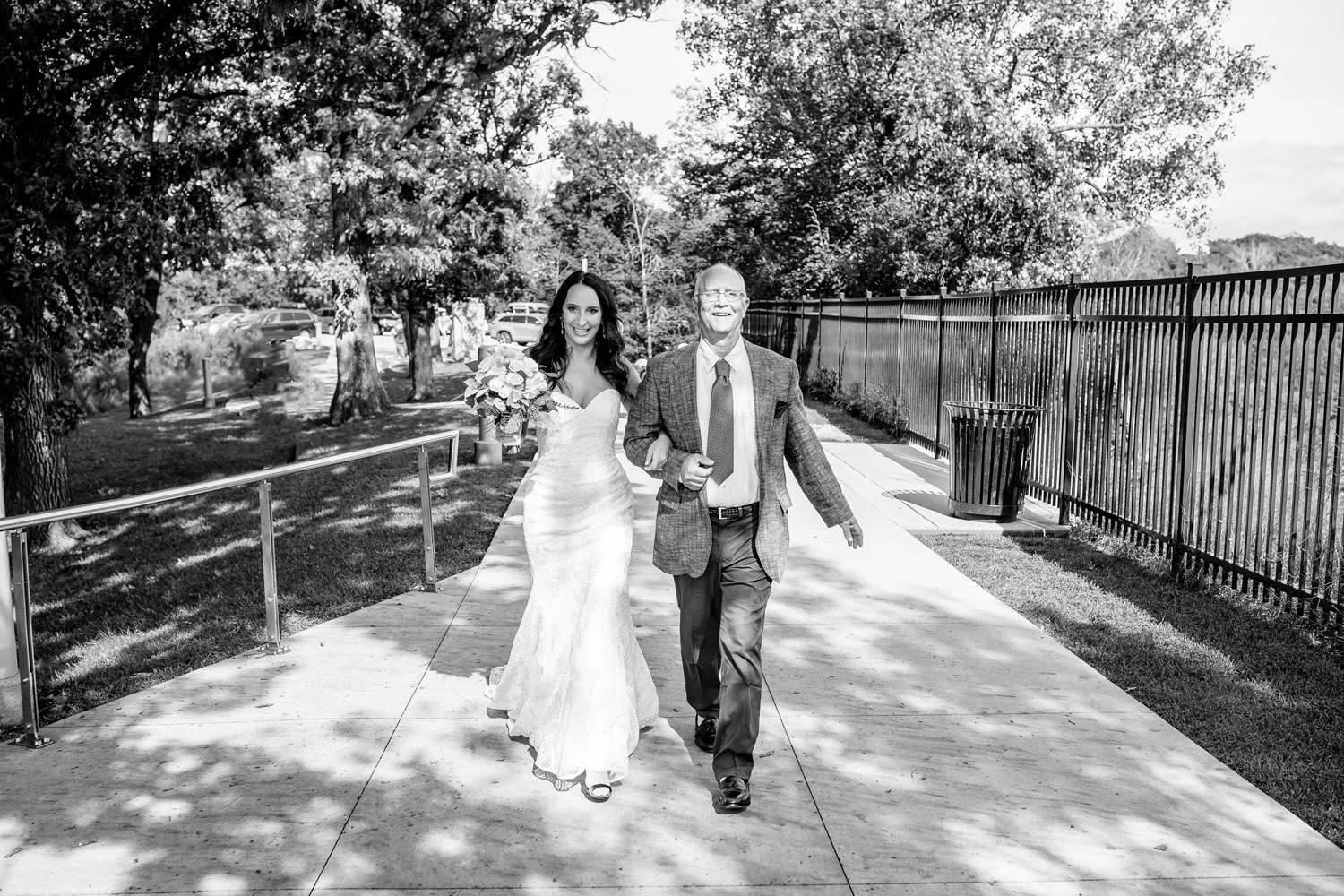 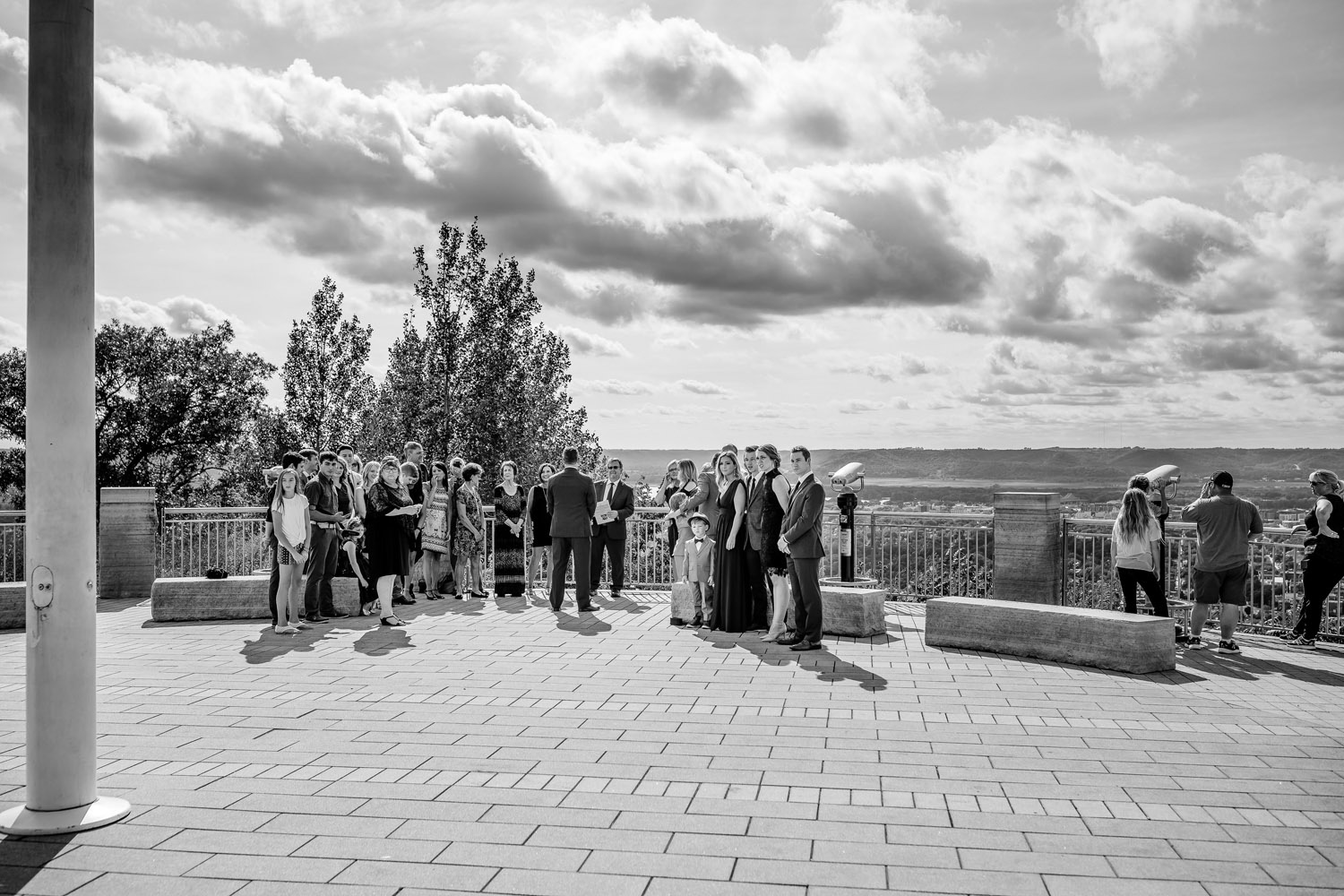 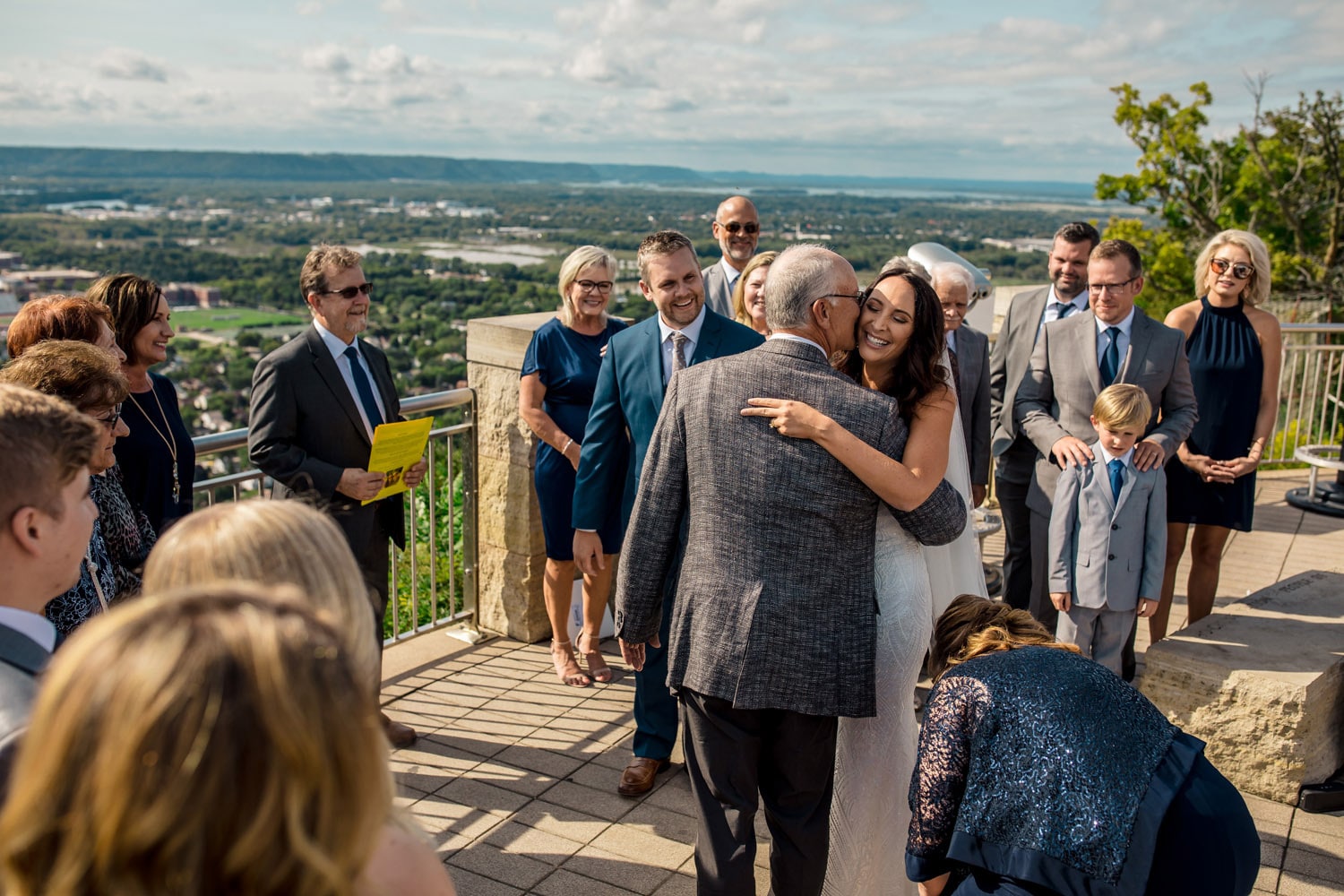 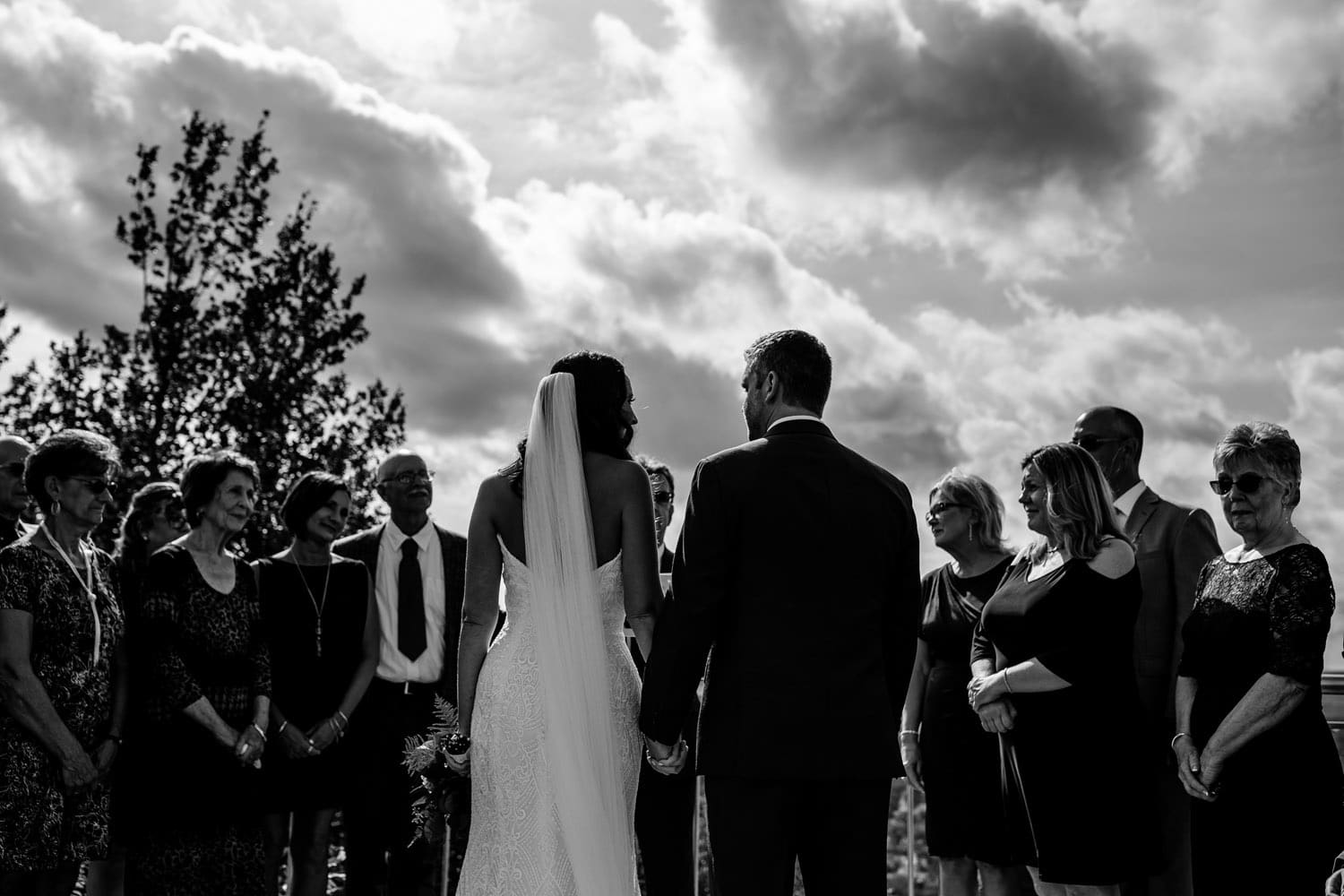 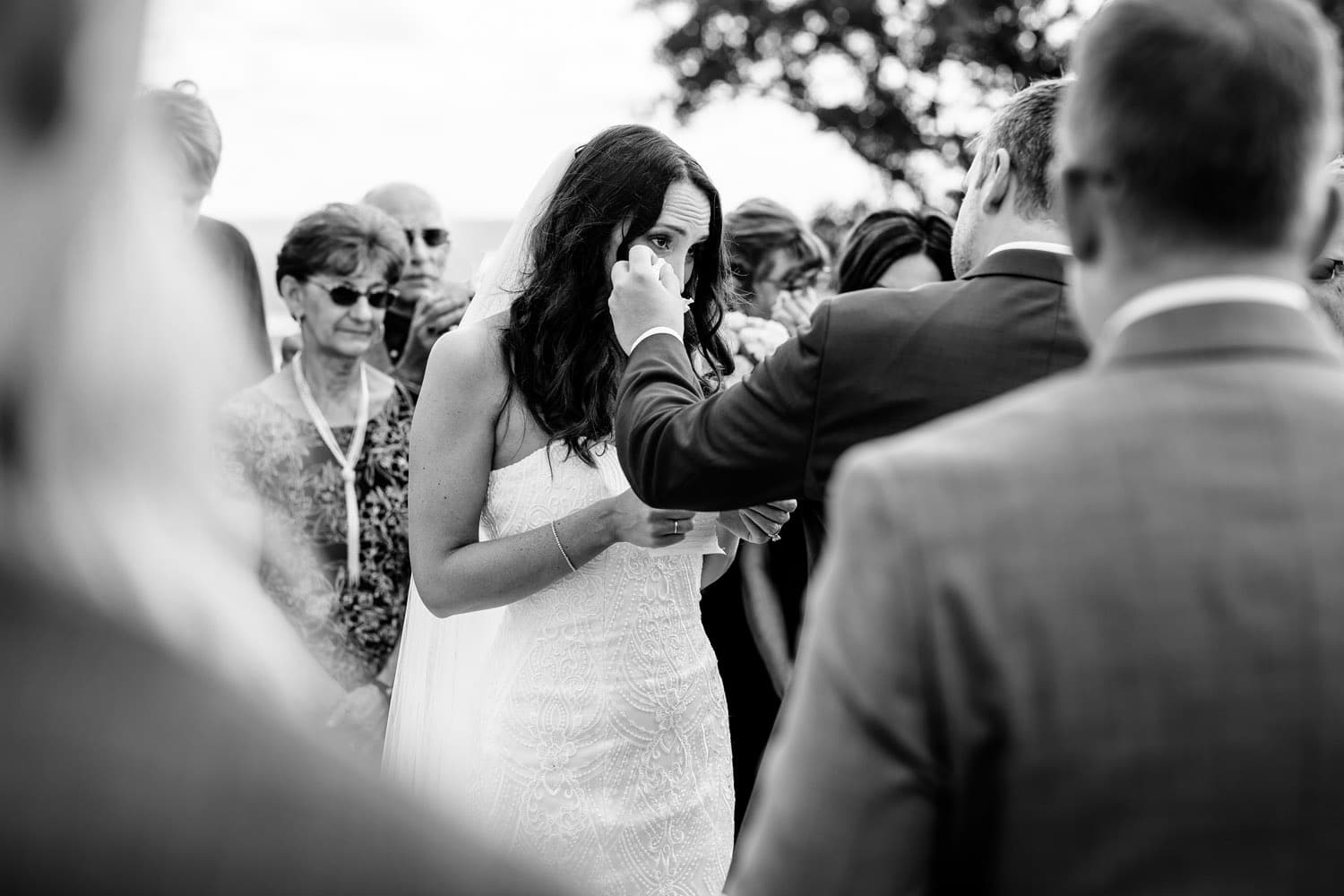 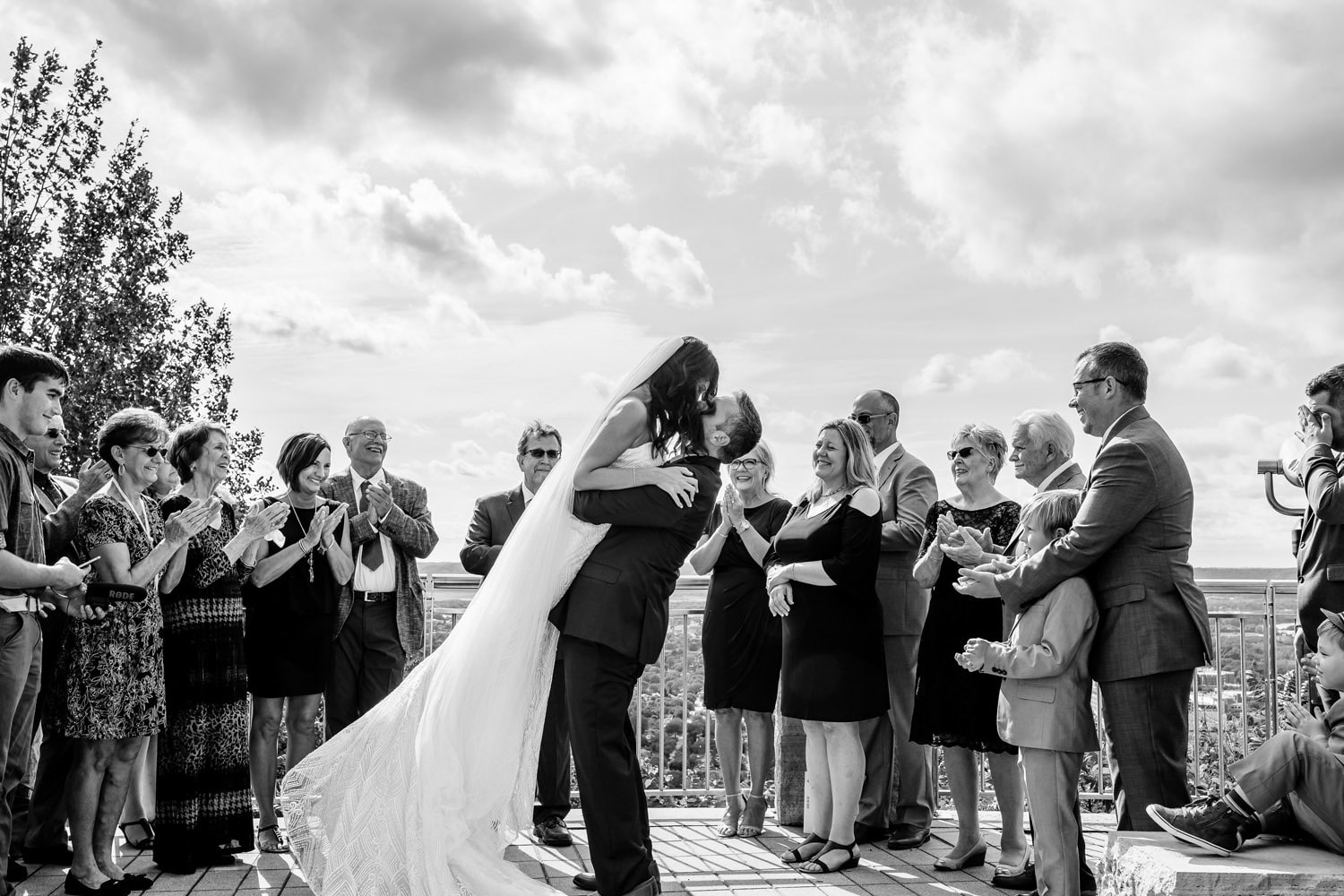 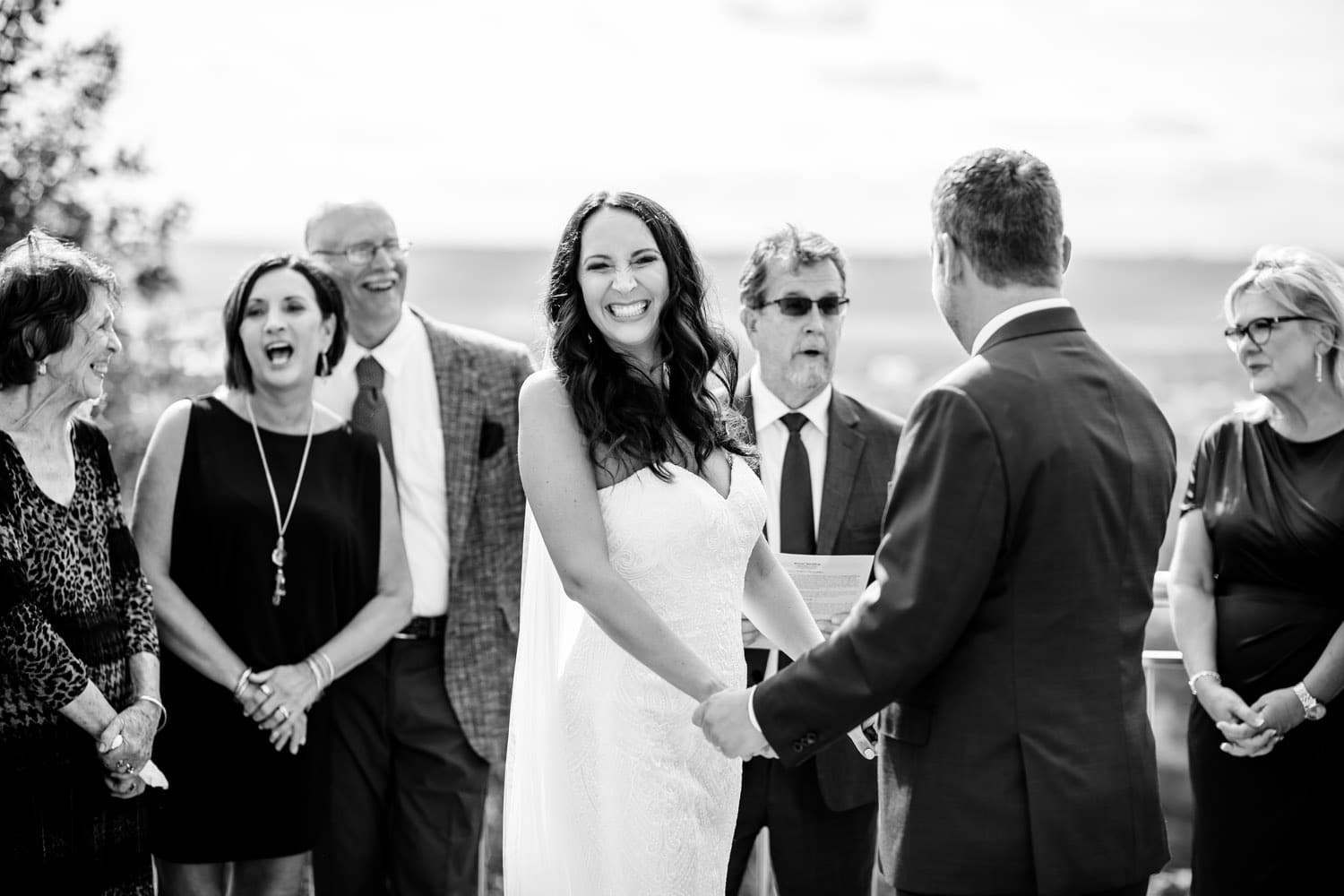 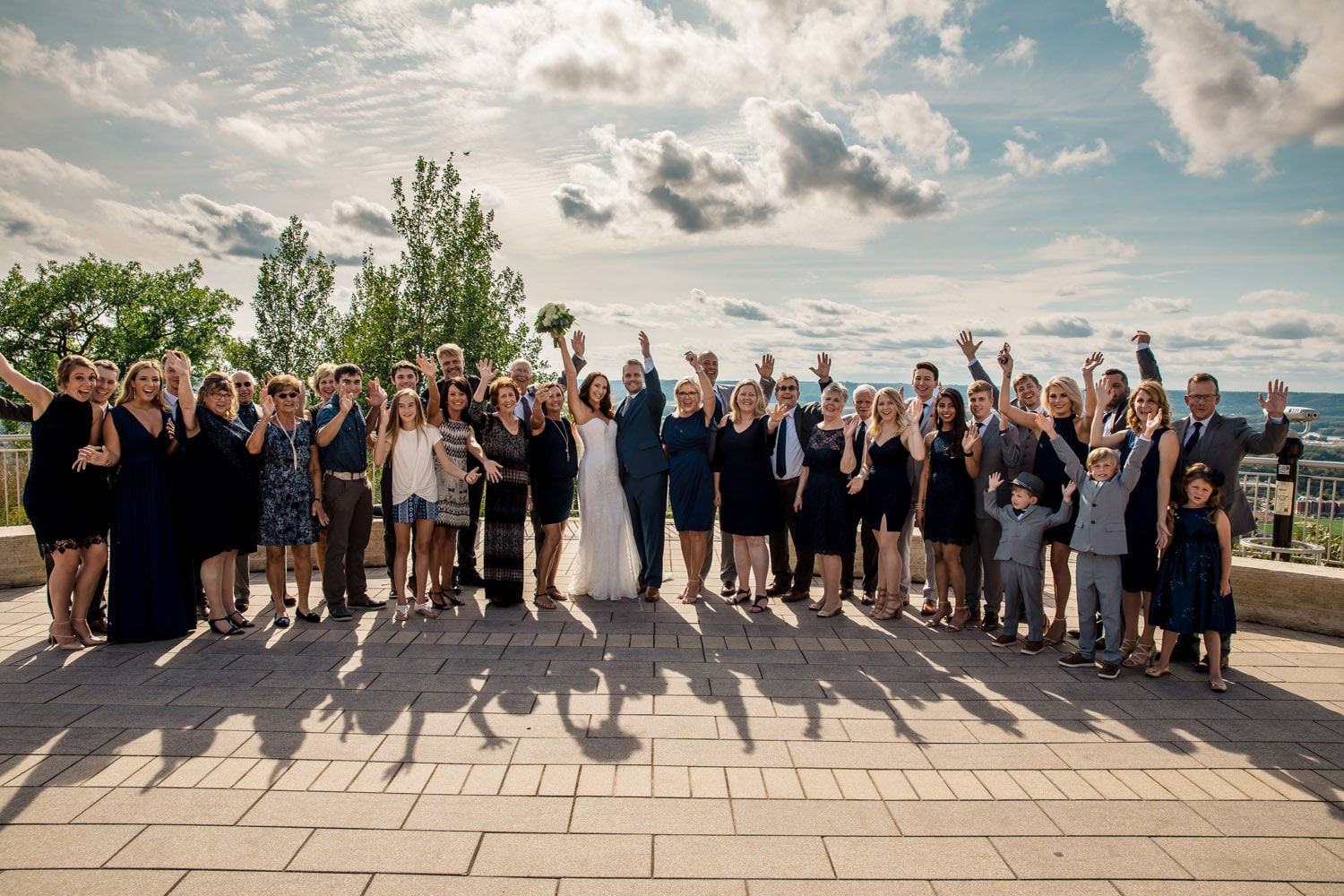 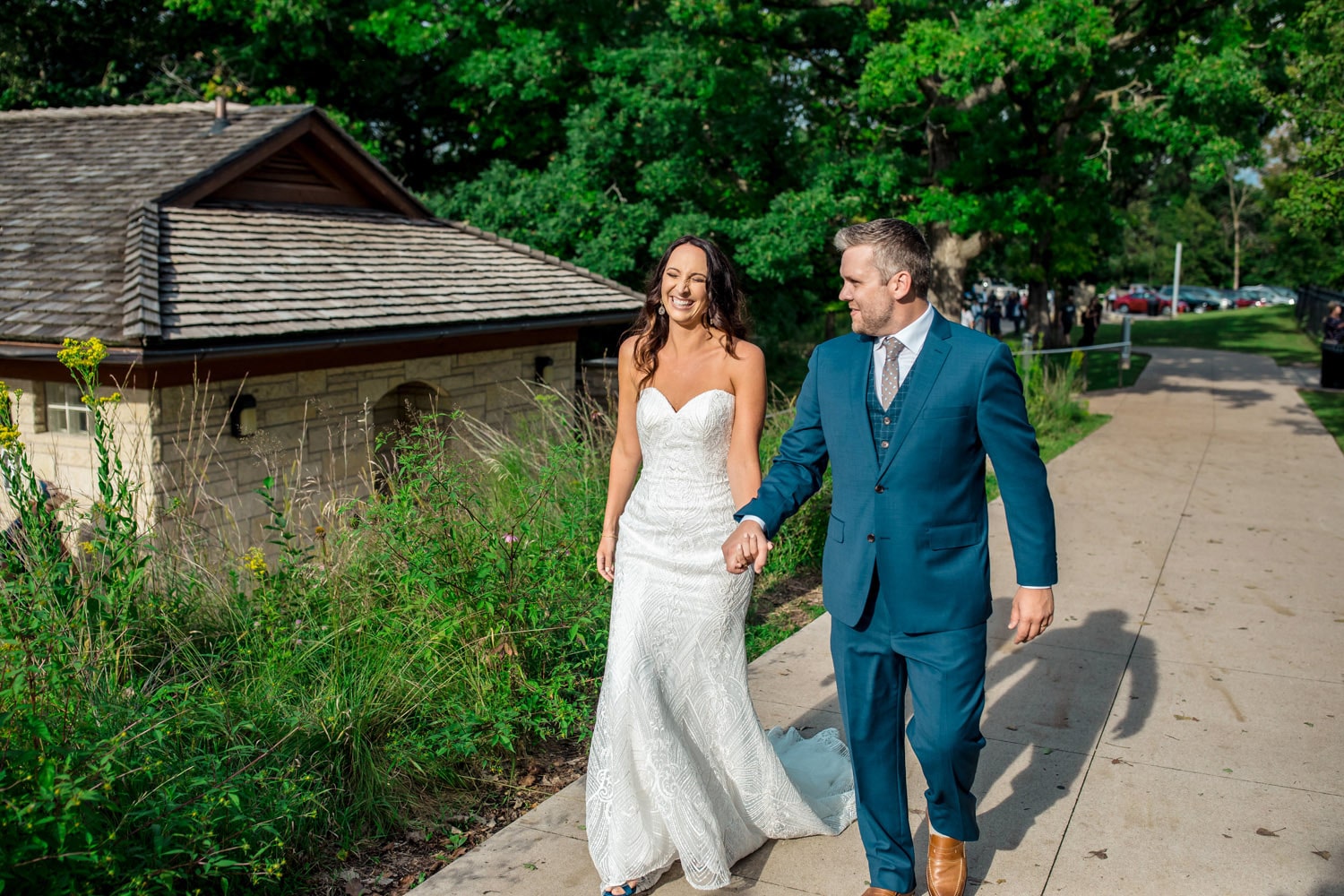 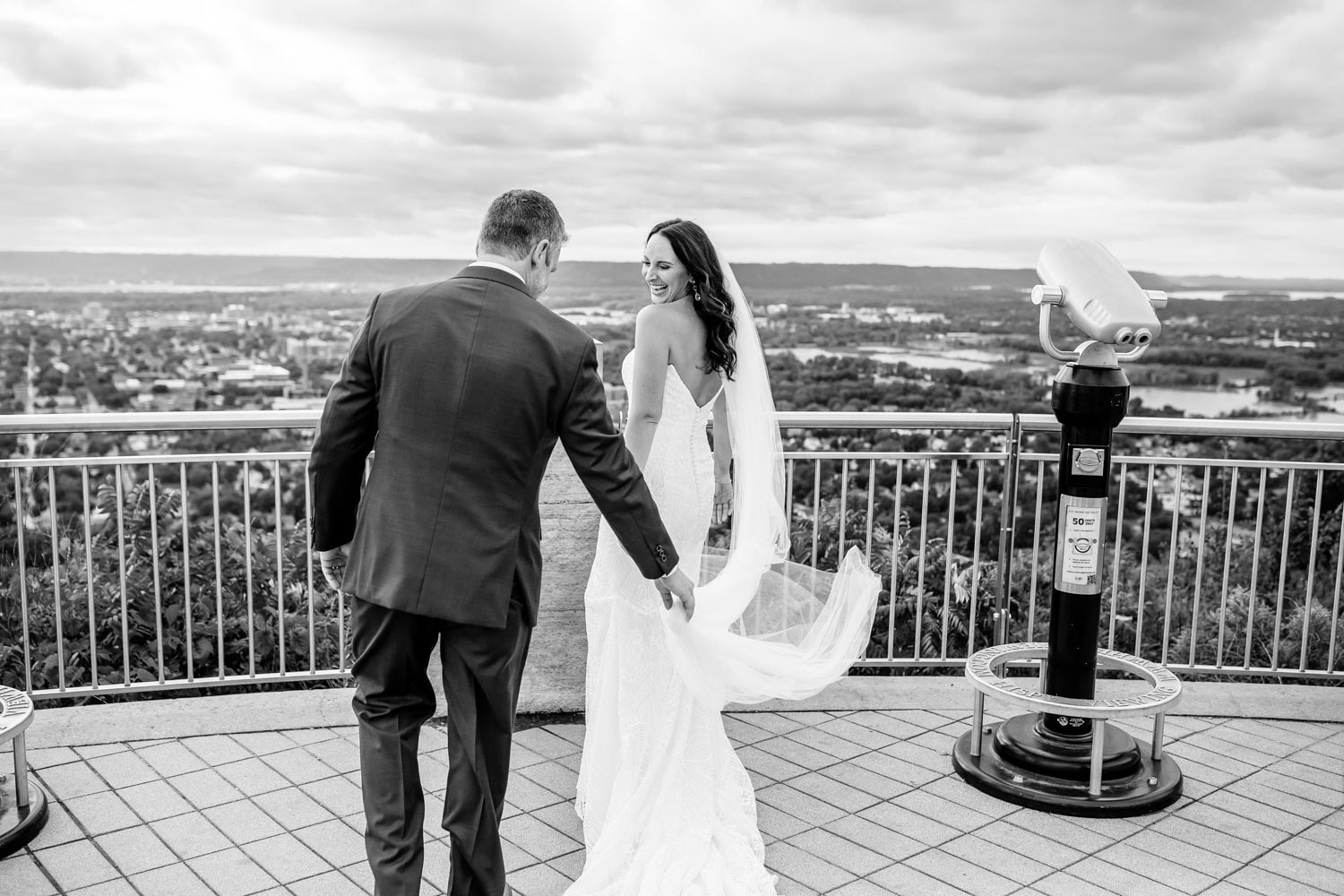 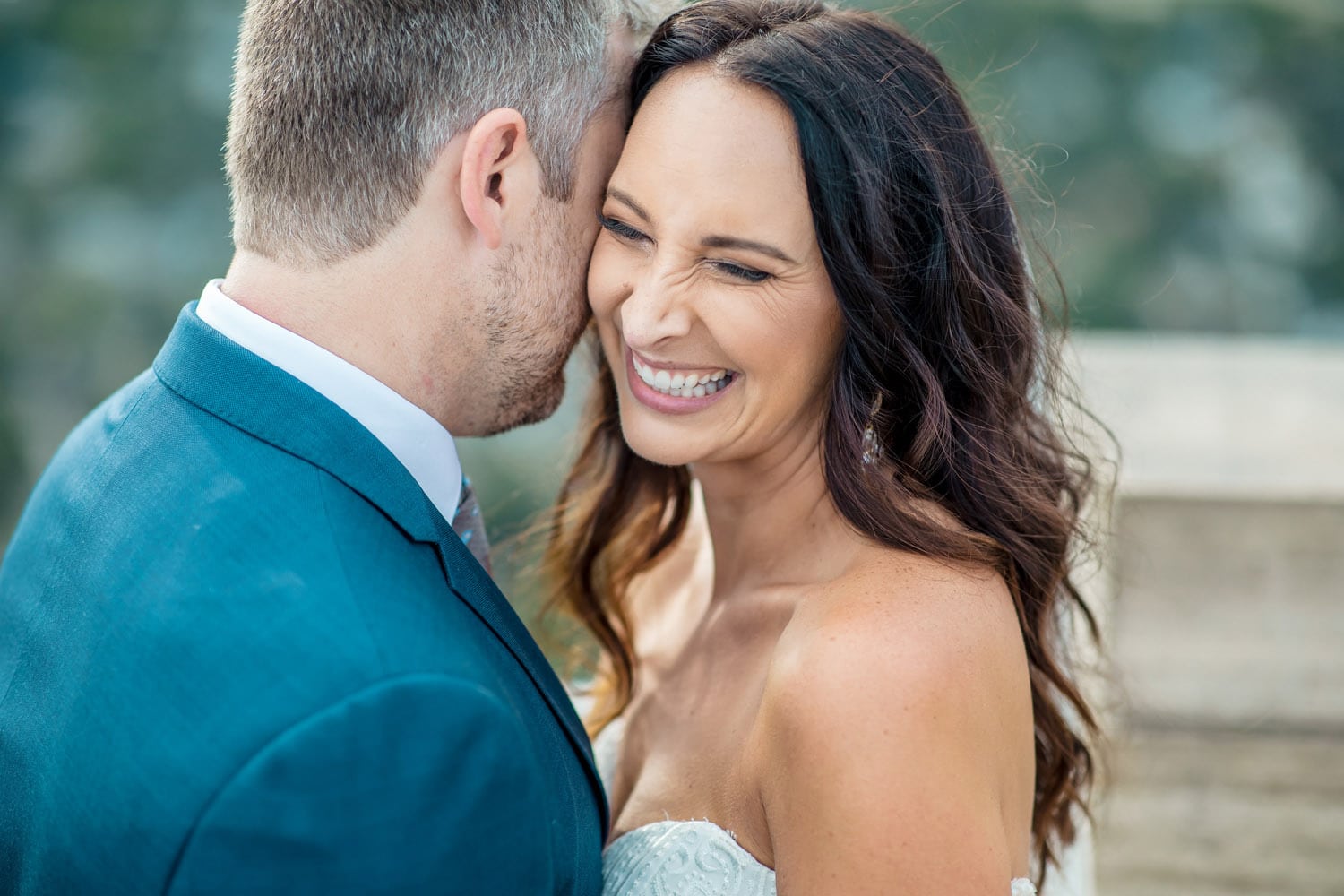 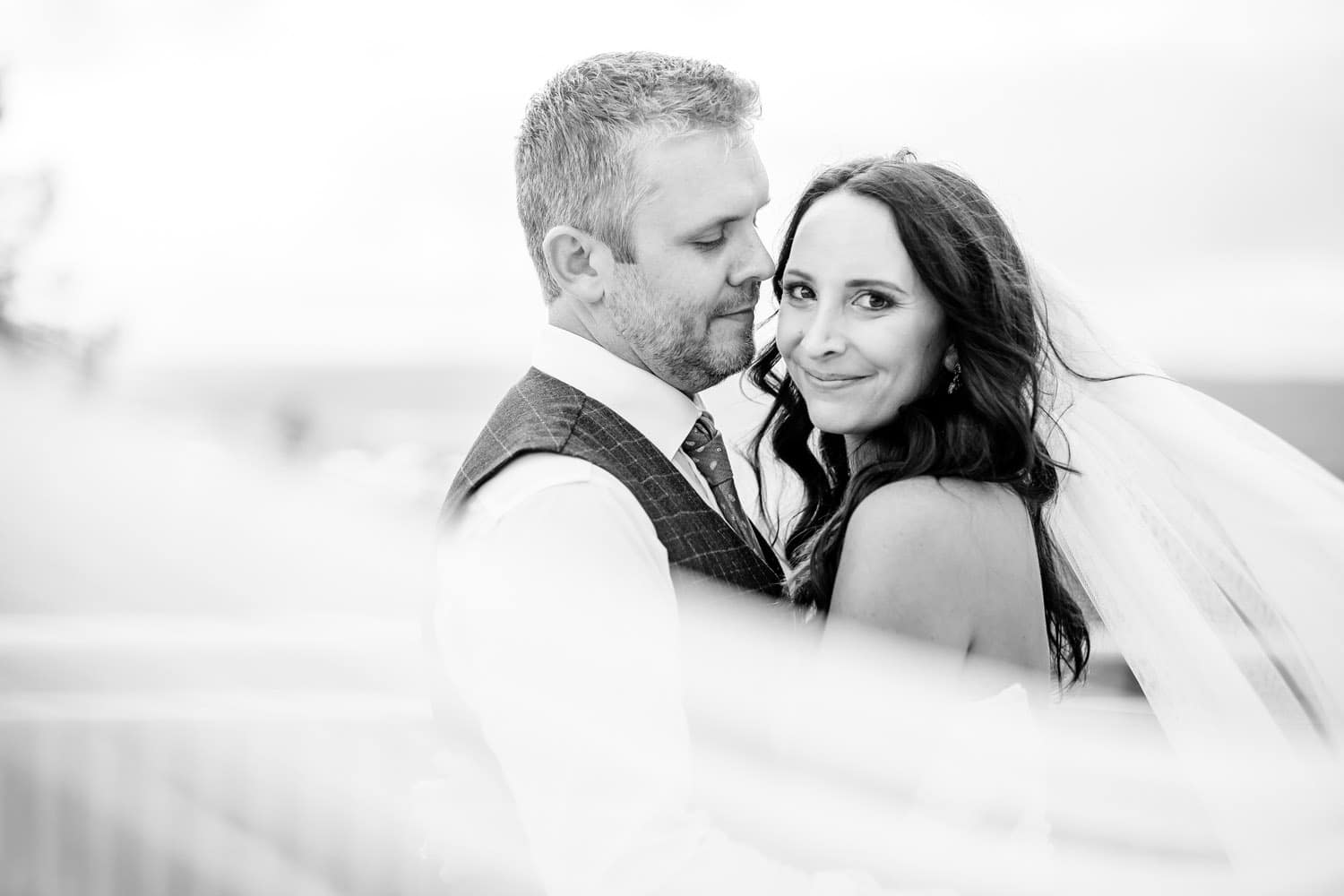 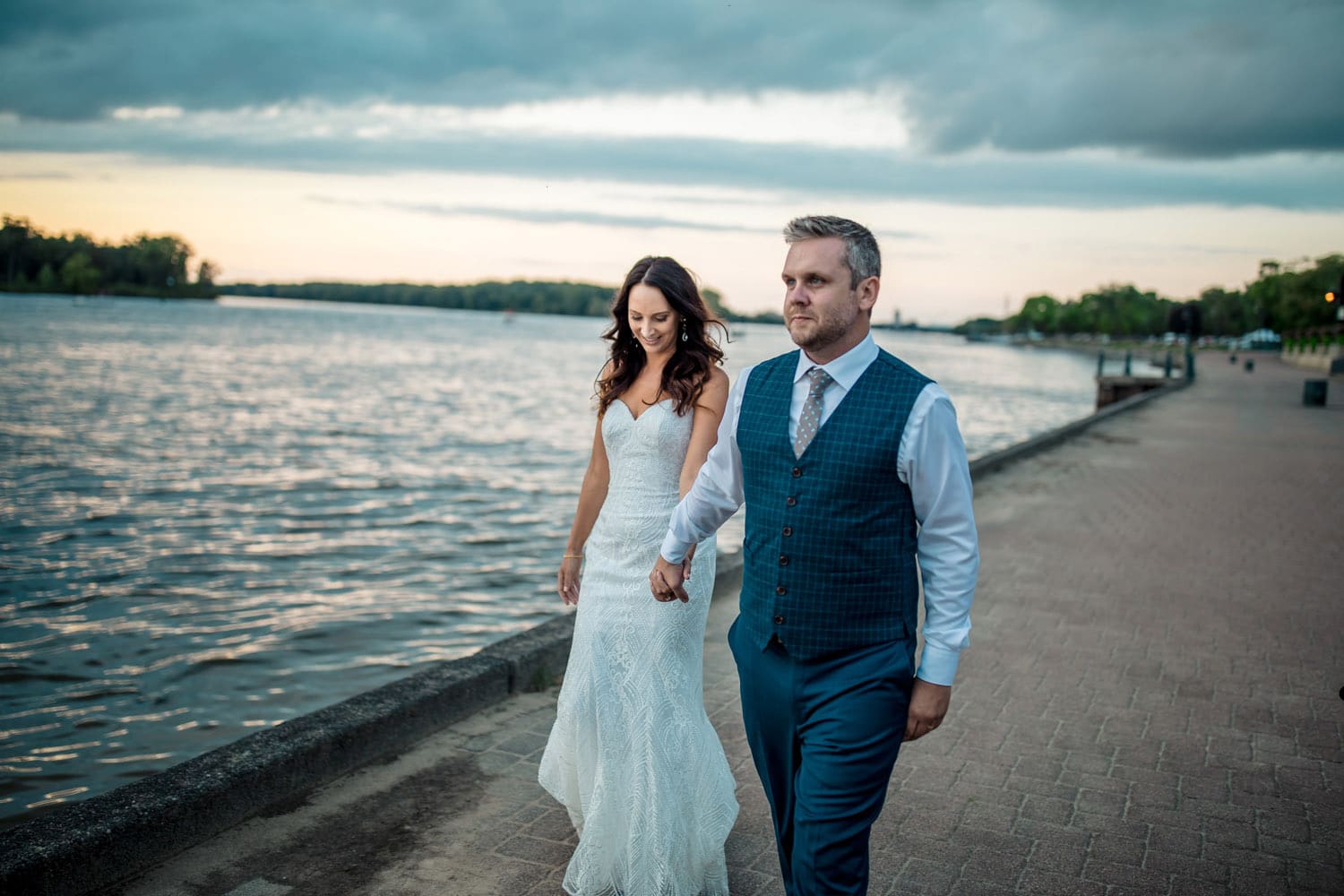 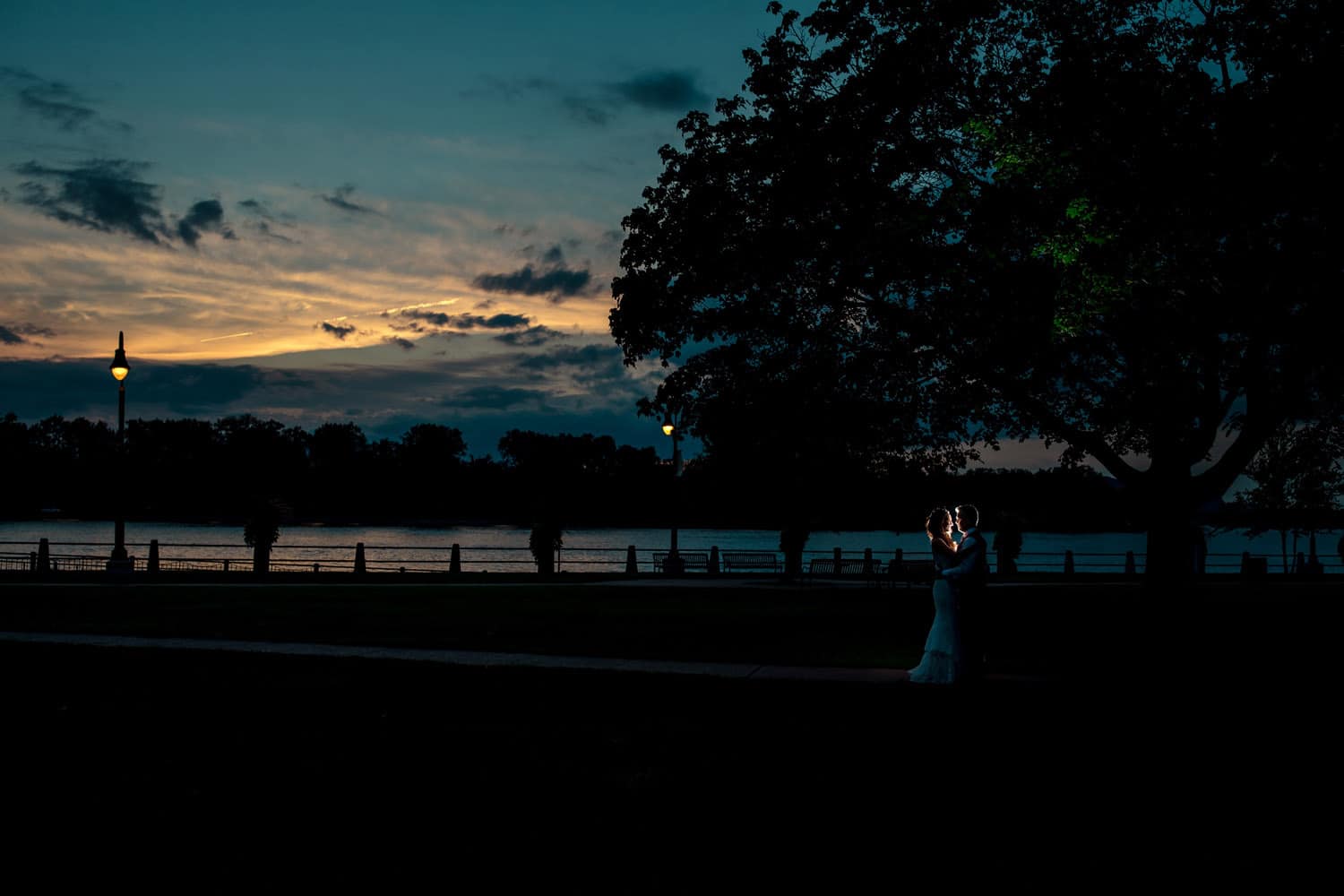 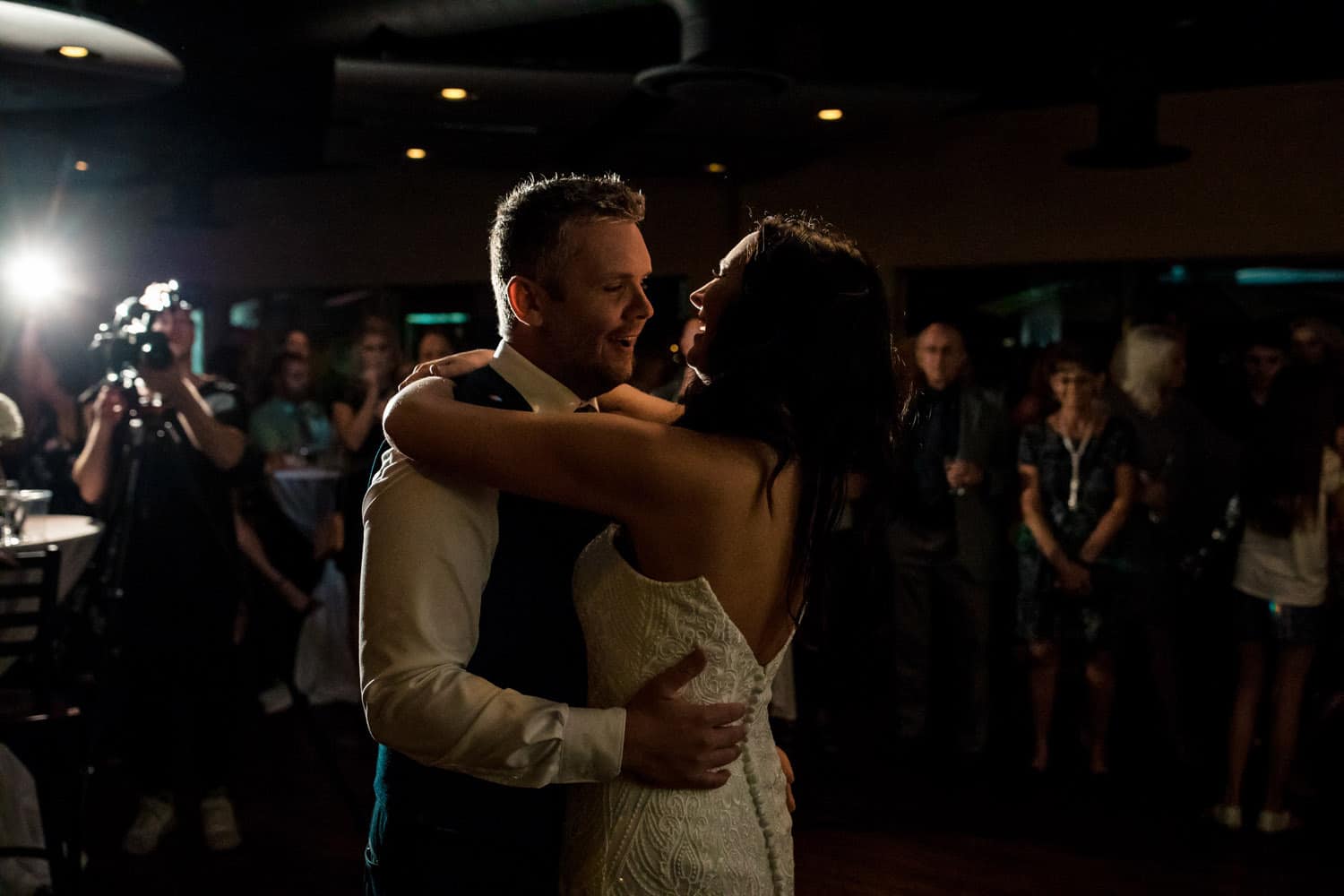 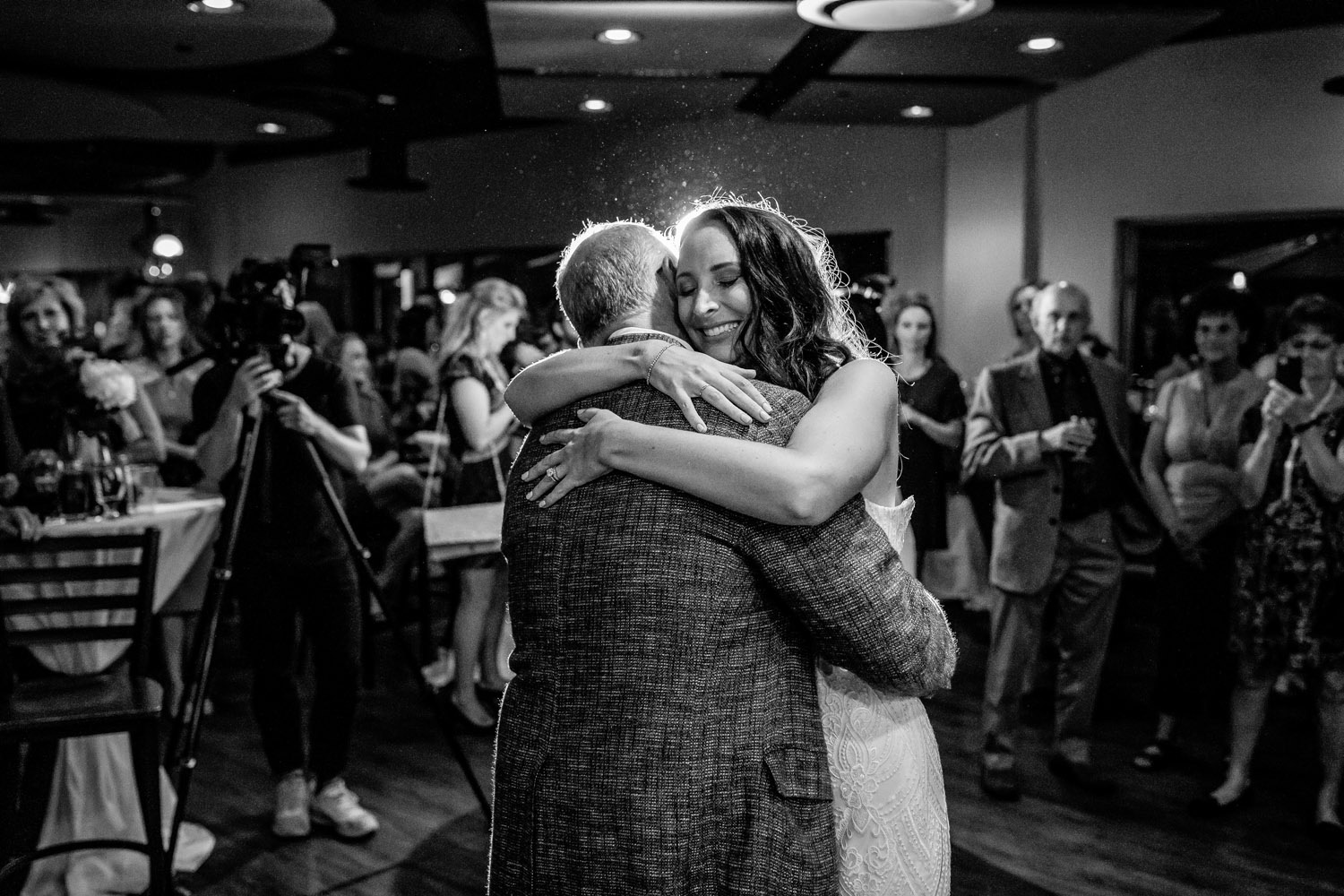 At 4 Sisters Restaurant in downtown La Crosse, Wisconsin, right on Front Street alongside Riverside Park and the Mississippi River, close friends and family members gathered to celebrate the marriage of Sam & Jason Brauer. It was an intimate reception, but it meant a lot to the couple. “We don’t consider our friends JUST friends, they are family”, Sam had explained prior to their big day.

Classical wedding traditions embody an essence of the past and are understandably valued by many, but we truly light up when a couple curates their special day to what best suits them, and what best correlates with their love story. Sam and Jason did just that.

The couple exchanged vows earlier that day on Grandad’s Bluff Point, in La Crosse, Wisconsin. There were no ushers. There were no chairs. There were no flower girls. There were no traditional bridesmaids and groomsmen. Sam and Jason were instead physically surrounded by their closest family members, who all donned blue colored attire (per the couple’s request). The only person to walk down an “aisle” was the bride and her father, who walked the paved sidewalk up to Grandad’s Point as Jason faced the bluff’s outlook view towards the expansive Coulee Region.

As Jason turned to face his soon-to-be wife, an earnest grin displayed upon his face. Family members faces beamed as Sam approached, smiling ear to ear herself. Her white strapless wedding gown with stunning beaded detail popped in the sunlight. She paired the dress with blue velvet strapped sandal heels, dangling earrings and a delicate golden bracelet that glistened against her sun kissed skin. She wore her chocolate brown hair down, curled softly, with a long white sheer veil pinned in the back. The bride carried a bouquet of white roses in one hand and her other arm was linked with her fathers as they approached the group.

Jason’s father officiated the ceremony, and the couple read personalized vows to each other in front of their family members. I had the chance to very briefly speak with Sam before the ceremony, as we were figuring out logistics on the bluff, and what stuck with me was her calming energy. She seemed so excited to become Jason’s wife, and so confident in herself and this union. Seeing the two of them together, exchanging their vows, it was clear this was shared energy. Without even knowing them that well at all, I could tell they were a team, one unit together, and there was an ease in that solidarity.

Once their heartfelt vows were spoken and their wedding rings were exchanged, Jason’s dad pronounced them husband and wife, and the two embraced and kissed for the first time as newlyweds. Their family clapped and cheered, and Jason lifted Sam into his arms. The duo exchanged some hugs with family members and took a group photo on Grandad’s Bluff Point before finding some shade for some more group formal photographs on the hot September afternoon. Being that the ceremony was exclusively close relatives, it provided some time for Sam + Jason to mingle with family before the celebrations began.

At the wedding reception location, 4 Sisters Wine Bar & Tapas Restaurant, guests enjoyed drinks and nibbled on mouthwatering appetizers being served on trays by staff members, awaiting the newlyweds arrival. 4 Sisters Wine Bar & Tapas Restaurant is a locally owned business, and is…surprise…run by four sisters! Their venue is unique, combining big city vibrancy with a small town feel in La Crosse, Wisconsin. During normal restaurant hours, 4 Sisters Wine Bar & Tapas Restaurant is best known for their warm and comfortable ambiance, wide variety of wines and “tapas”. 4 Sisters “tapas” are a selection of smaller signature dishes, served on small plates – some hot, some cold, all perfect for sharing between couples or groups for a varietal meal experience full of flavor. The décor is artistic and modern with an eclectic twist, and is brilliantly paired with comfortable seating options, including couches and cushy chairs with accent pillows. It kind of feels like dining at a party in a fashionable friend’s home – a cozy, posh environment in which you want to stay awhile and soak everything in. In the warmer months of the year, guests can dine outdoors on the patio, with amazing “front-row” views of Riverside Park and the mighty upper Mississippi River.

The bountiful cheese platter assembled by 4 Sisters at Sam and Jason’s wedding reception looked almost too perfect to eat – cascading with a variety of cheeses, meats, pretzels and crackers, among other hors d’oeuvres – it was truly a Midwesterner’s dream. Later on, a pasta bar would also be available for wedding guests, consisting of a variety of noodle options, sauces, and proteins. As a wedding photography team who lives for food, this was heaven.

Anyway, back to the couple – the true reason for the celebration! After getting a few quick photos in historic downtown La Crosse, Sam and Jason made their grand arrival to the reception. Hugs were plentiful as close friends from near and far caught up with the newlyweds. Friends from Sam’s days working in downtown La Crosse raved to us about what a great gal she was, and how happy they were that Sam and Jason had found each other. A decorative item hung on the wall was something that perfectly commemorated the beginning of their love story – screenshots of their first conversations, on an app called Bumble. Story has it (according to the bride’s father’s speech later on) that the bride may have had another date planned later on in the evening of Sam and Jason’s first date, but Sam had excused herself to the bathroom to text that other guy and cancel because of how well she was hitting it off with Jason. You’d have to ask the two of them about the real story though, as it seemed there were some discrepancies in the tale Sam’s dad told. Whatever the true love story may be, that first exchange between the pair hung on the wall of 4 Sisters for all to read, with the phrase, “Darn you, Bumble”, scribed at the top. It was such a unique creative touch to reception décor!

Jason’s mother’s speech validated the strong bond I had sensed earlier on between the couple. She told a story about meeting Sam for the first time, before her and her husband was heading off to Florida for a vacation, and knowing Sam was “the one” for her son. A small gesture, Sam reaching over and squeezing Jason’s hand, looking into his eyes quickly as they all sat and chatted, made a big impression on Jason’s mother. She could tell they were a team – truly partners together, and that meant all the world to her.

After a few more heartwarming speeches, Sam and Jason took a chance to express their gratitude to their loved ones for celebrating their marriage on this exciting day. Then, they had their first dance as husband and wife. Once the dance floor opened, everyone was moving about and socializing.

Sam and Jason’s wedding was unique in many ways, a true reflection of this magnetic pair. Looking at the two of them together, you could tell they were meant to be. Cliché as that might sound…look at the photos of them…it really is the truth! (And hey, if you somehow still don’t believe in soulmates after looking at this duo, at least you can agree…they make a beautiful couple!) We want to sincerely thank Sam and Jason Brauer for letting us be a part of their special day. We wish you both a lifetime of happiness and love, congratulations you two!

*This post is not sponsored by Bumble, but uh, Bumble, if you want to? Let’s talk…

Pre-Ceremony Location: The bride got ready for the big day in the beautiful Radisson Hotel in downtown La Crosse, Wisconsin. The guys met at the Radisson then headed to Alpine Inn near Grandad’s Bluff, where they enjoyed a few beers before the ceremony.