On a sunny August afternoon, Erin got ready for the day she would wed her fiancé Corey. Accompanied
by her five bridesmaids and two flower girls, the crew finished up their hair and makeup looks in their
room at Hotel Winneshiek in Decorah, Iowa. A hot pink balloon shaped in the phrase, “yay” sat atop a
couch in the room, and could easily describe the atmosphere – Erin’s smile and laughter was contagious.
The gals all took a moment to get a group photo in their floral kimono-style robes before changing into
their beautiful gowns.

Erin’s mother and one of her bridesmaids helped her get buttoned into her wedding dress – a gorgeous
pearly-white hue with a lace V-neck front, ribbon belt that laid on the waistline with elegant diamond
accents in the center front area, and an A-line skirt with layers of sheer fabric. The back of the top of
the dress was sheer with delicate lace detailing, and beautiful white buttons going down the spine.
The bride wore her hair in a curly flowy up-do, with a single braid around half the crown of her head,
and a small grouping of baby’s breath on the other side. She completed the look with eye catching
diamond and silver earrings, and a small matching bracelet. Later, she’d put on her soft sheer veil –
made my Corey’s mom – that she had gushed to us about earlier, noting the amount of time it took to
perfect for the big day. The bridesmaids each wore a different gown style, all of which were in various
shades of pink. Erin’s two flower girls wore matching white dresses with sparkle detailing on the skirts
and flower tiaras.

Meanwhile, Corey and his five groomsmen and one bearer were taking some group photos together at
Decorah Lutheran Church, located in Decorah, Iowa, where the ceremony would soon take place. There
was a nervous excitement in the air with the groom and his pals. I believe it was at this time that I
overheard Corey warn someone he was a crier. The men looked dapper in their dark navy blue suits and
pants, paired with white dress shirts, satin white pocket squares and tan leather dress shoes. The
groom wore a vest that matched the suit jacket and a satin white tie, while his groomsmen wore baby
pink colored ties.

The couple opted to not do a first look prior to the ceremony, so as Erin and her bridal party headed to
Decorah Lutheran Church located in Decorah, Iowa, Corey was given warning of their arrival, so as not to
catch a glimpse of his soon-to-be wife. As the ceremony began, Corey walked his parents and several
family members from both sides down the aisles, wiping away tears of happiness and audibly saying
again, “I’m such a crier!”, while someone in the chapel suggested he just let it happen. It was
heartwarming to see the pure joy of the groom prior to saying “I do”.
As the ring bearer and two flower girls made their way down the aisle, ending the entrance of the bridal
party, Corey stood at the alter waiting for the bride. Erin and her father approached, and the groom’s
emotion was authentically showcased for all to see. Erin’s father assisted her in pushing a layer of her

one-of-a-kind veil over her smiling face, and shook hands with his soon-to-be son-in-law before the two
of them hugged.

Throughout the ceremony, it became apparent how truly sacred this marriage was to them, and how
important the couple’s parents were to them. After exchanging their bonding vows with each other,
Corey and Erin invited both of their parents up to pray as a group. Huddled together, heads bowed at
the altar, the six of them held hands. Following their prayer, they individually embraced one another in
a hug– it was a sincere depiction of love. With the vows exchanged, Corey and Erin were pronounced
husband and wife, and tenderly kissed as their loved ones clapped and cheered, tears of joy displayed by
many. The newlyweds made their way back into the church after exiting to take the time to dismiss
their guest by row, giving them a chance to briefly greet each person in attendance in lieu of a receiving
line. Mr. and Mrs. Smock mentioned to us at some point during the day that there were some very dear
friends who took the time to celebrate their big day with them, including a friend they were introduced
to in school as a foreign exchange student who traveled from afar, and a group of guys who had very
recently completed basic training.
Erin and Corey joined their bridal party on a large shuttle bus with “Just Married” signs and made their
way to Effigy Mounds National Monument Park to take some photos. According to the website, the
Effigy Mound Culture reaches from Dubuque, Iowa, north into southeast Minnesota, across southern
Wisconsin from the Mississippi to Lake Michigan, and along the Wisconsin-Illinois boundary. The
counties of Dubuque, Clayton, and Allamakee contain almost all of the 200 prehistoric effigy mounds
found in Iowa. The mounds preserved here were built by Native Americans mostly in the first
millennium, and many of these mounds are shaped like animals, including bears and birds. The legends
and stories of the Native Americans whose ancestors built the mounds depict the effigy mounds as
ceremonial and sacred sites. The couple chose the location for its lush natural beauty and quaint
environment, and the dramatic arched bridge made for a stunning backdrop.
Cocktail hour was in full swing for wedding guests at the reception venue, the elegant Dousman House
in Prairie du Chien, Wisconsin. This historic landmark was built in the 1860’s as a hotel that served
railroad and steamboat travelers coming to the city, even hosting several past Presidents and dignitaries
from all over the globe. The hotel was in business until the 1920s, and has since been restored into a
memorable event space. Highlighting the natural beauty and essence of the Mississippi River on the
scenic St. Feriole Island, the location has ample room to host weddings or celebrations large or small,
both inside with their cocktail lounge and two floors available for seating, and outside on their spacious
lawn and patio area. They boast “some of the best catered food available in northeast Iowa or
Southwest Wisconsin”, with catering provided by The Barn Restaurant.
Wedding guests began cheering out on the patio as the newlyweds approached. Inside and out, loved
ones enjoyed beverages and a yummy popcorn bar. Guest dining tables were adorned with baby pink
tablecloths, cream colored ruffled table runners, and a fun fact about the couple at each table’s center
next to the soft colored floral arrangements. Small potted succulents were sprinkled about tables as
take-home gifts for guests with a mini flag sign that read, “let love grow”. The guestbook near the
entrance was a sleek photo album of pictures of the Erin and Corey, with room for everyone to write a
personalized message to the duo. A special table dedicated to loved ones that had passed
commemorated their memory through arranged photographs near the entryway as well.

Highly unique and memorable to us was the latte bar the couple had set up in the venue space. Guests
could choose from three options on the Latte Menu – an Almond Raspberry Latte AKA “Erin’s favorite”,
a Carmel Mocha Latte, “Corey’s favorite”, or a Vanilla Latte, perfectly titled, “Wedding Gown”. There
were even a few staff members on hand operating the latte machine – five star idea you two!
Desserts were abundant, with not only a classic white wedding cake, decorated with pink roses and
baby’s breath, but a full out cupcake bar as well. There were three delectable options – “Granny’s Black
Magic”, a chocolate cake with almond cream cheese frosting, “Butterfinger” – Granny’s Black Magic
cake, Butterfinger buttercream plus mini Butterfinger candy, and “White Almond Raspberry”—a white
almond cake with seedless raspberry filling and almond buttercream. It was as amazing as it sounds.
During the cake cutting, Erin’s eyes lit up in disbelief as Corey took the fork he had served her a small
slice of cake from and smeared some frosting on her cheek. She burst out in laughter, and quickly
taught him a lesson about payback as she smushed a piece of cake on his nose, just below his glasses.
First dances took place in the Dousman House’s Bar Room, with plenty of natural light beaming in from
the tall arched windows. Erin’s mom joined in near the end of the father and daughter dance, and the
value of family was again solidified. During the “golden hour” as the sun began to set over the mighty
Mississippi River, we stole the couple away for some brilliant sunset photographs. It was such a
splendid day getting to spend time with Erin and Corey on their wedding day. We wish you the best,
and congratulations you two! 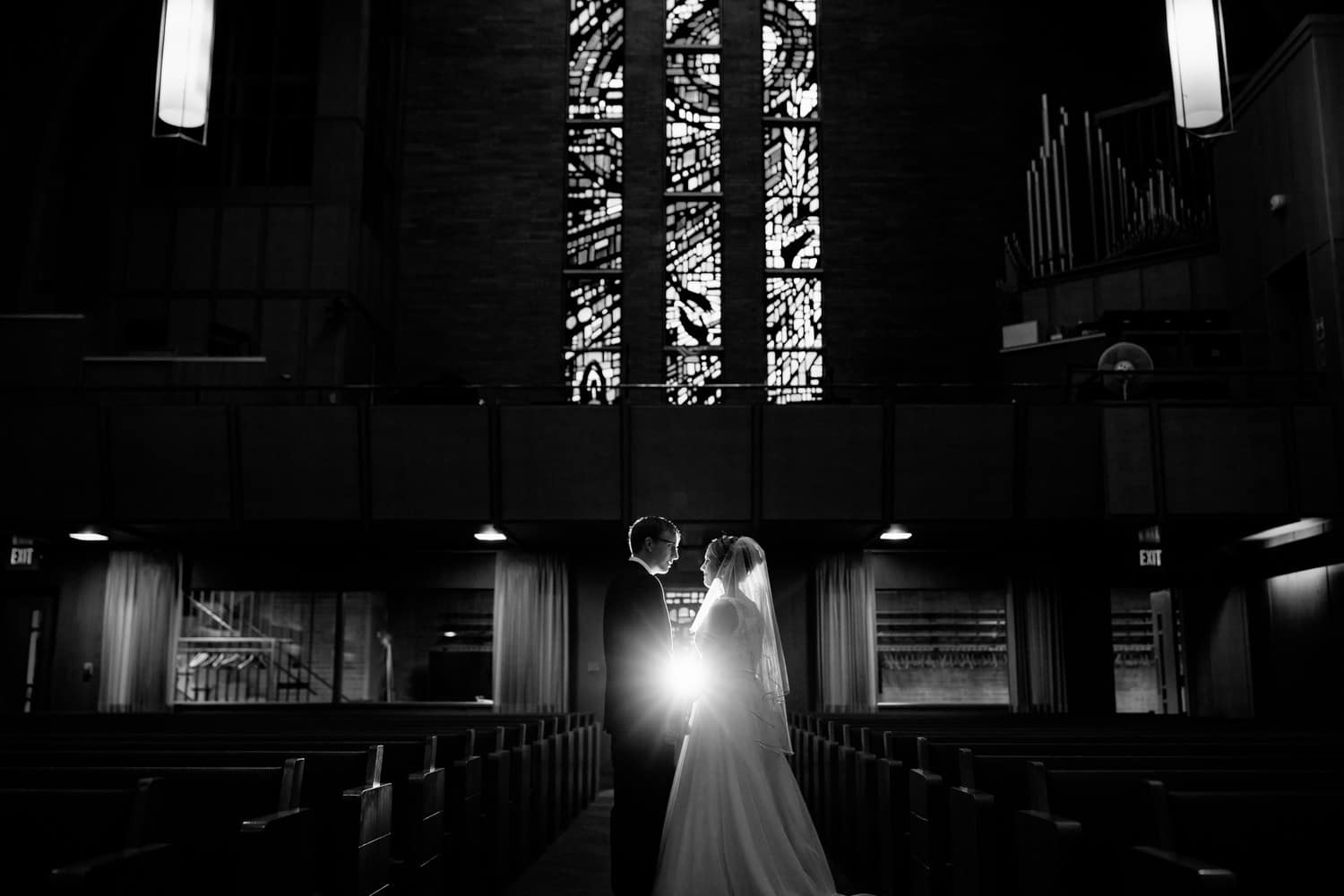 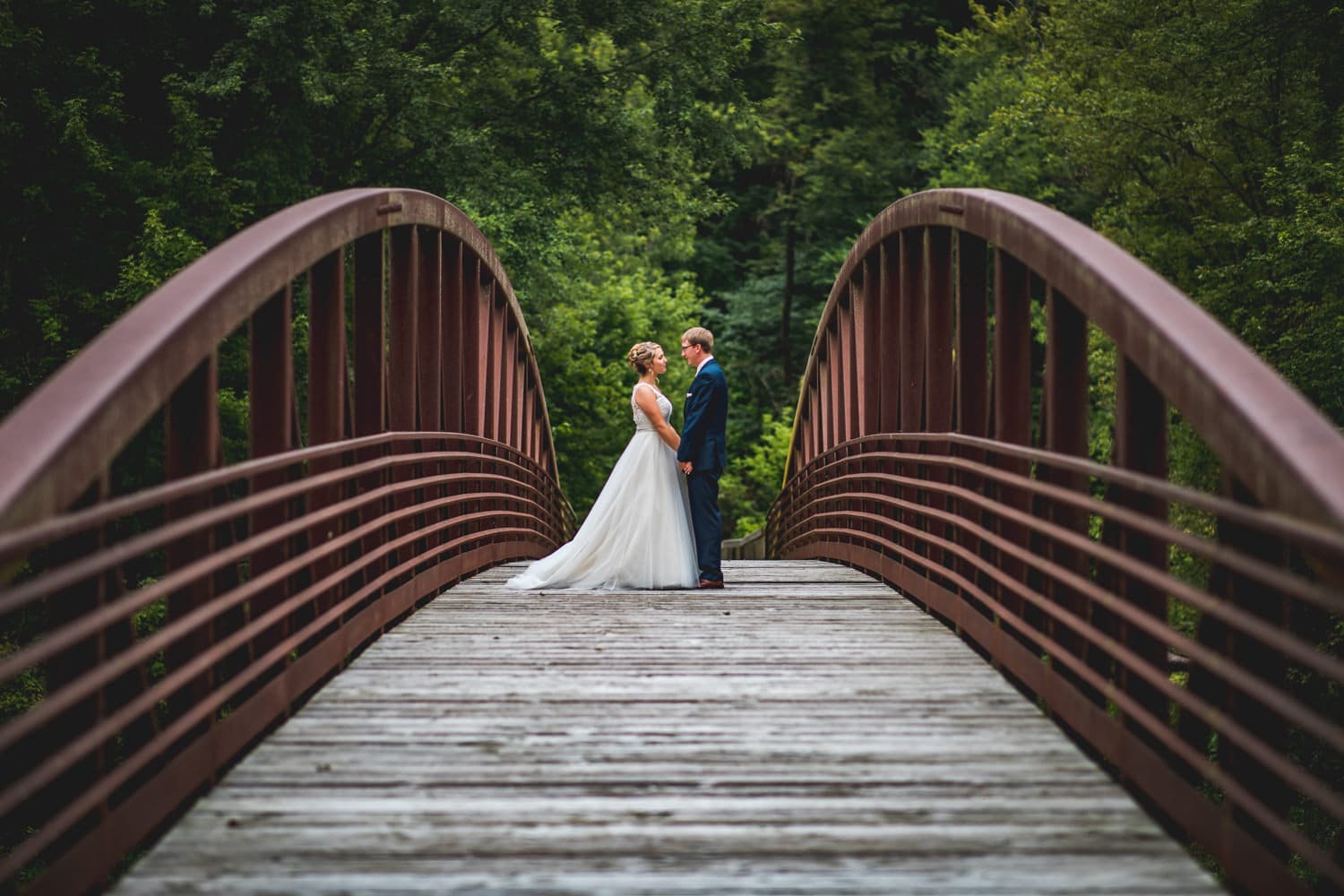 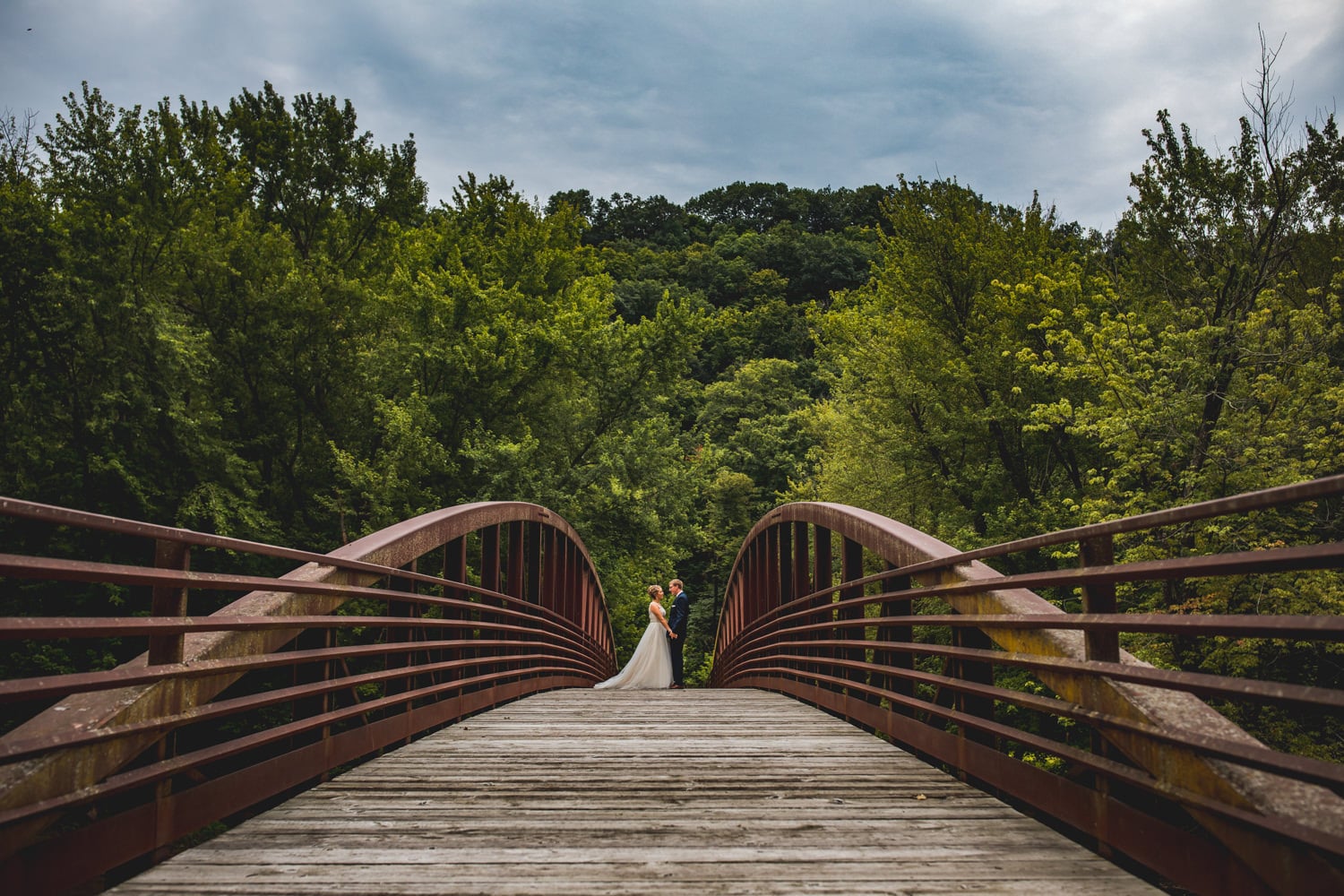 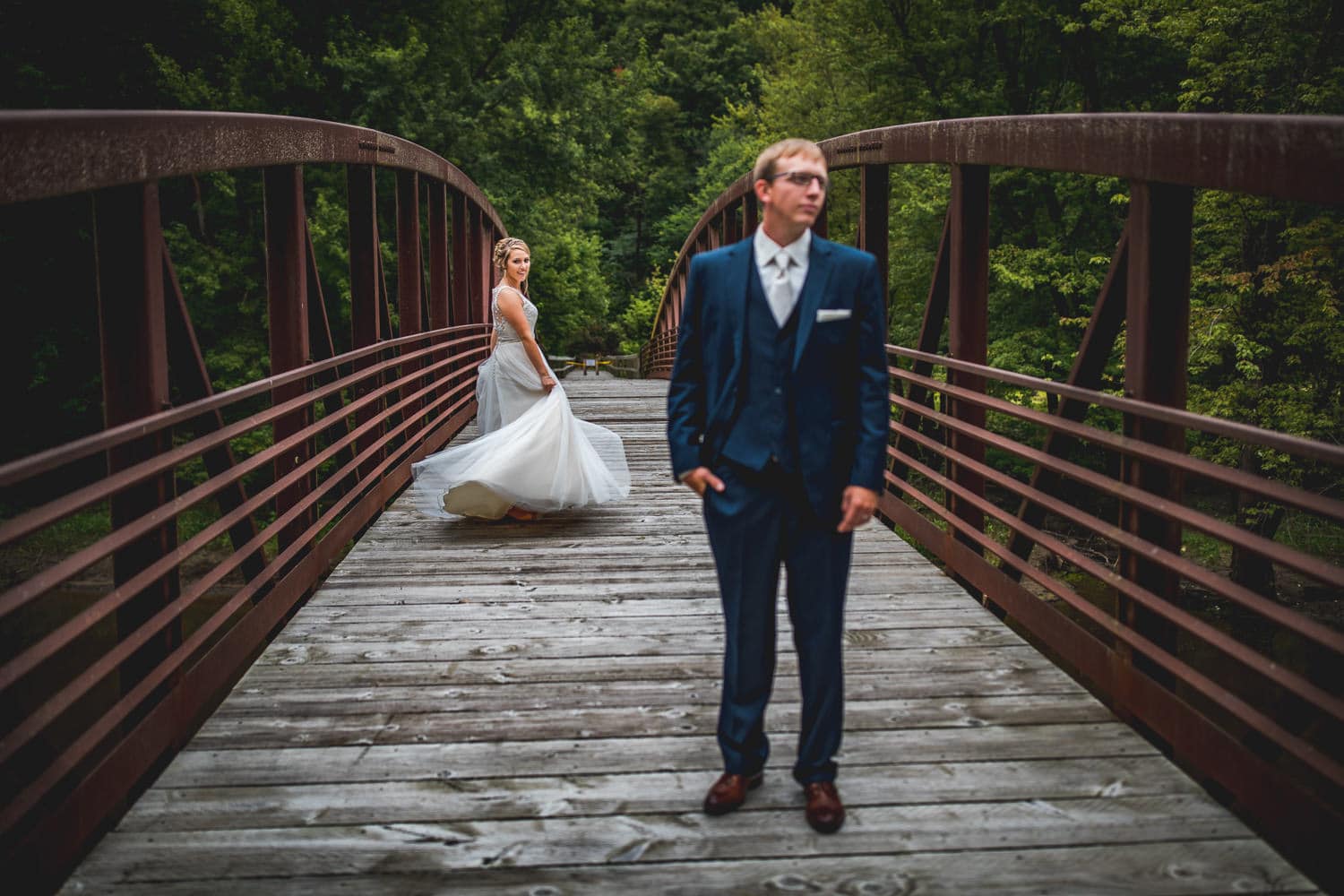 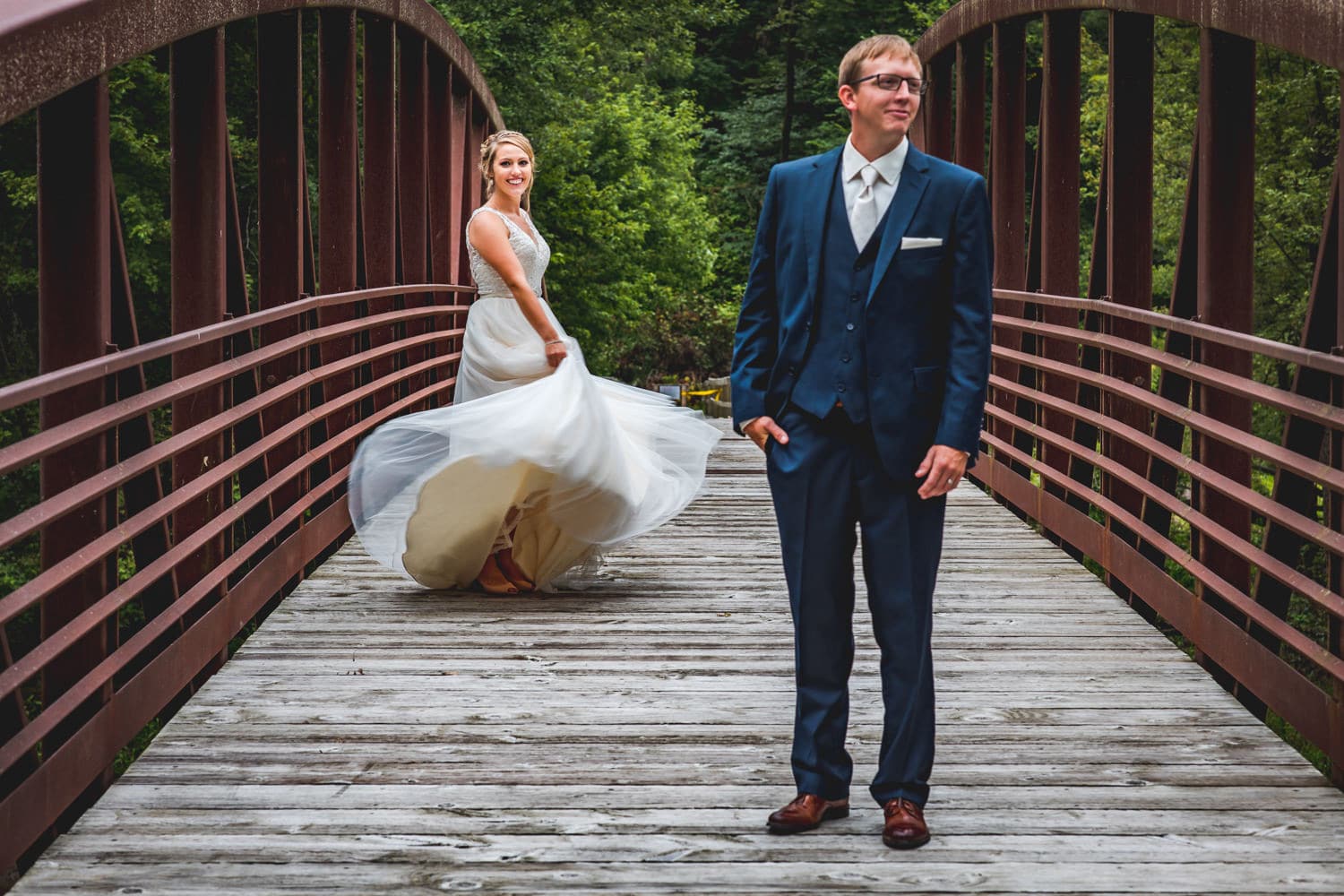 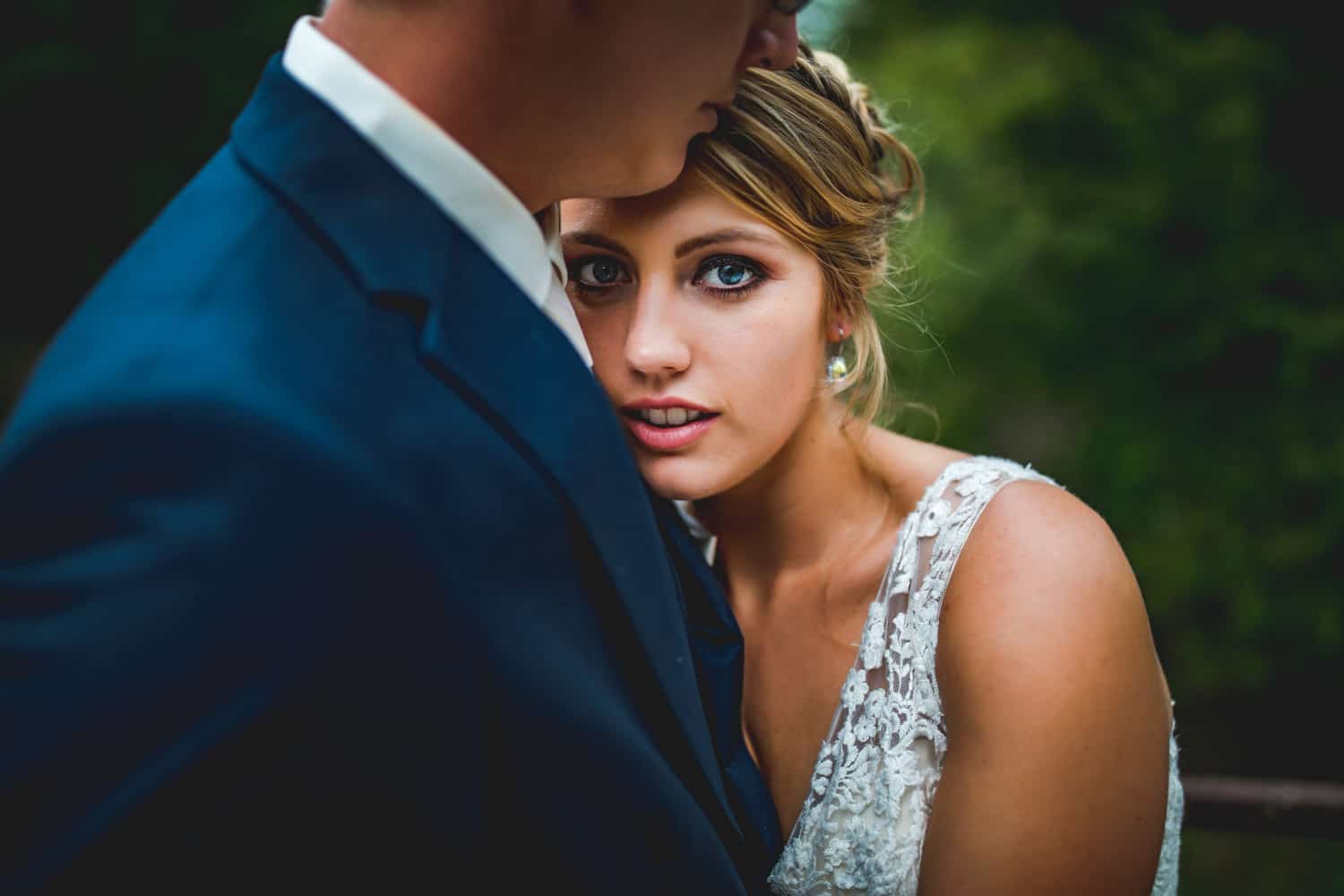 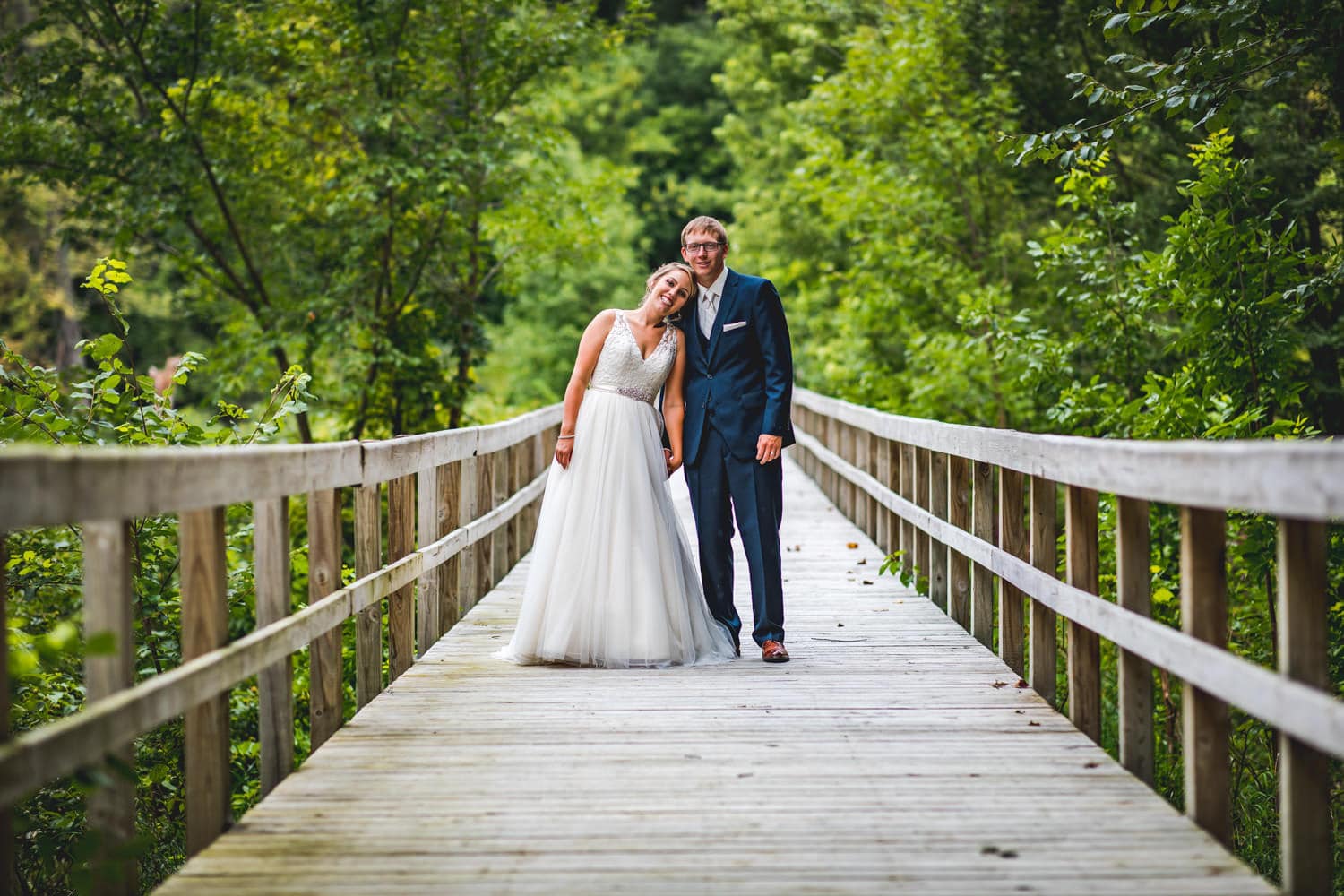 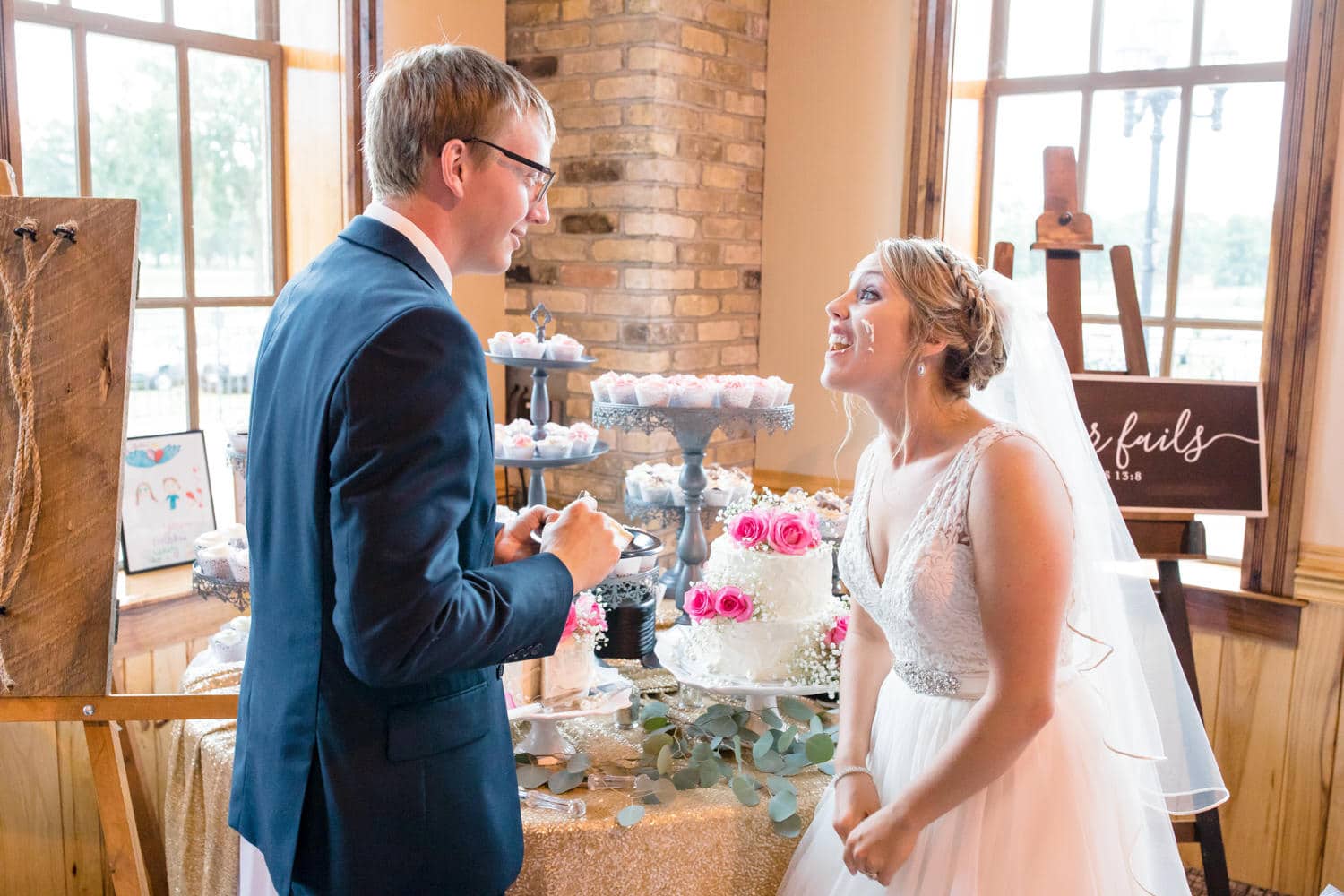 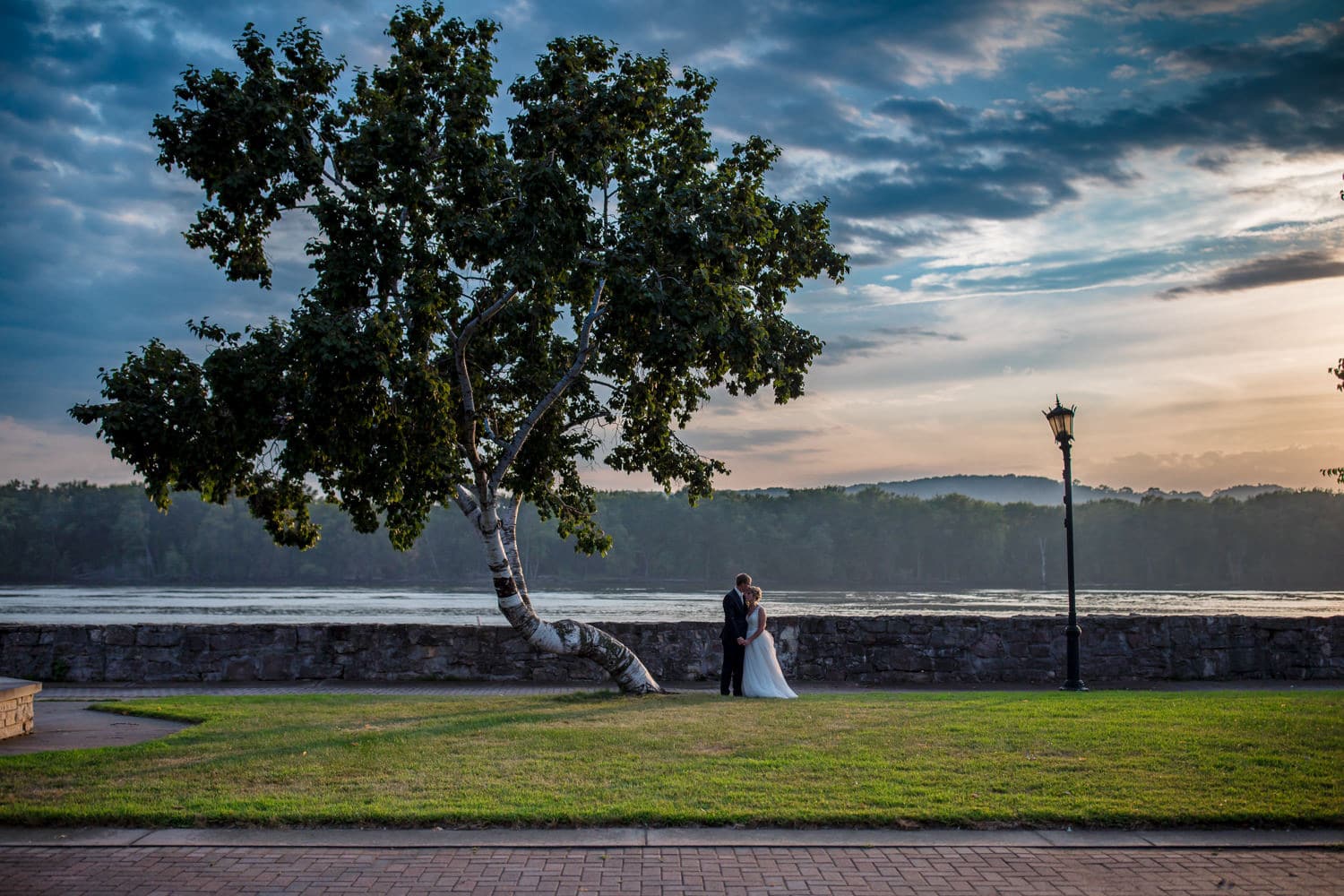 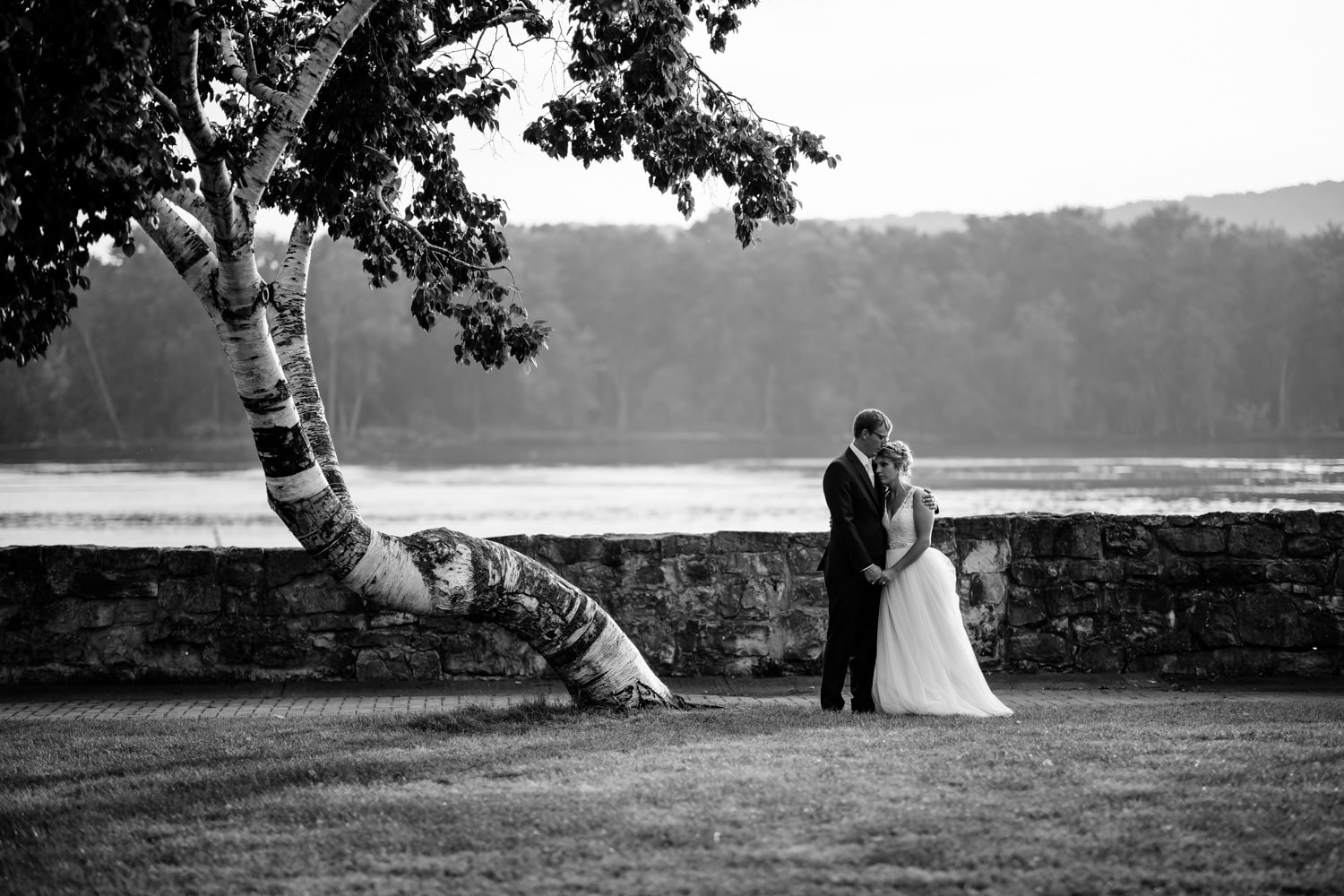 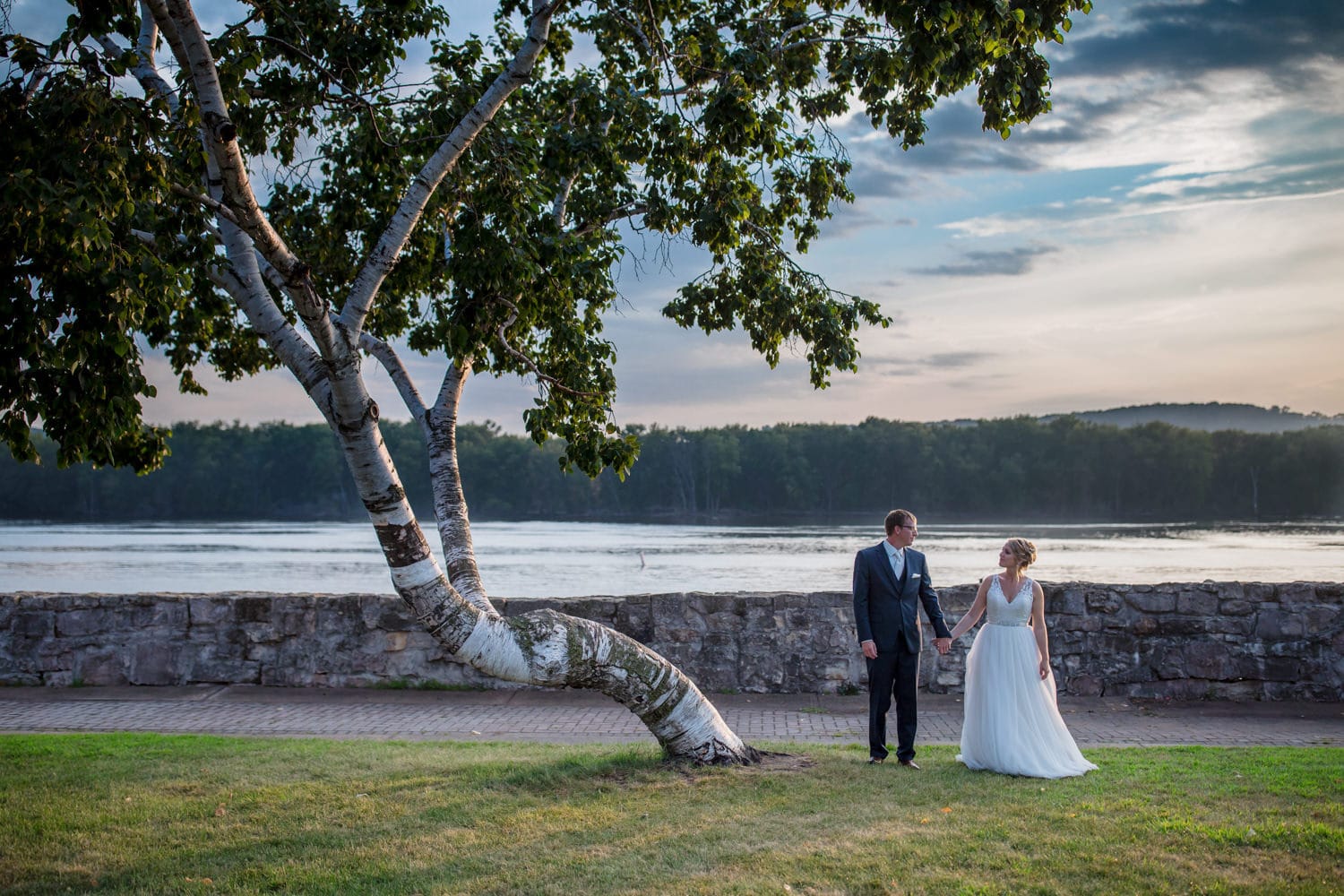 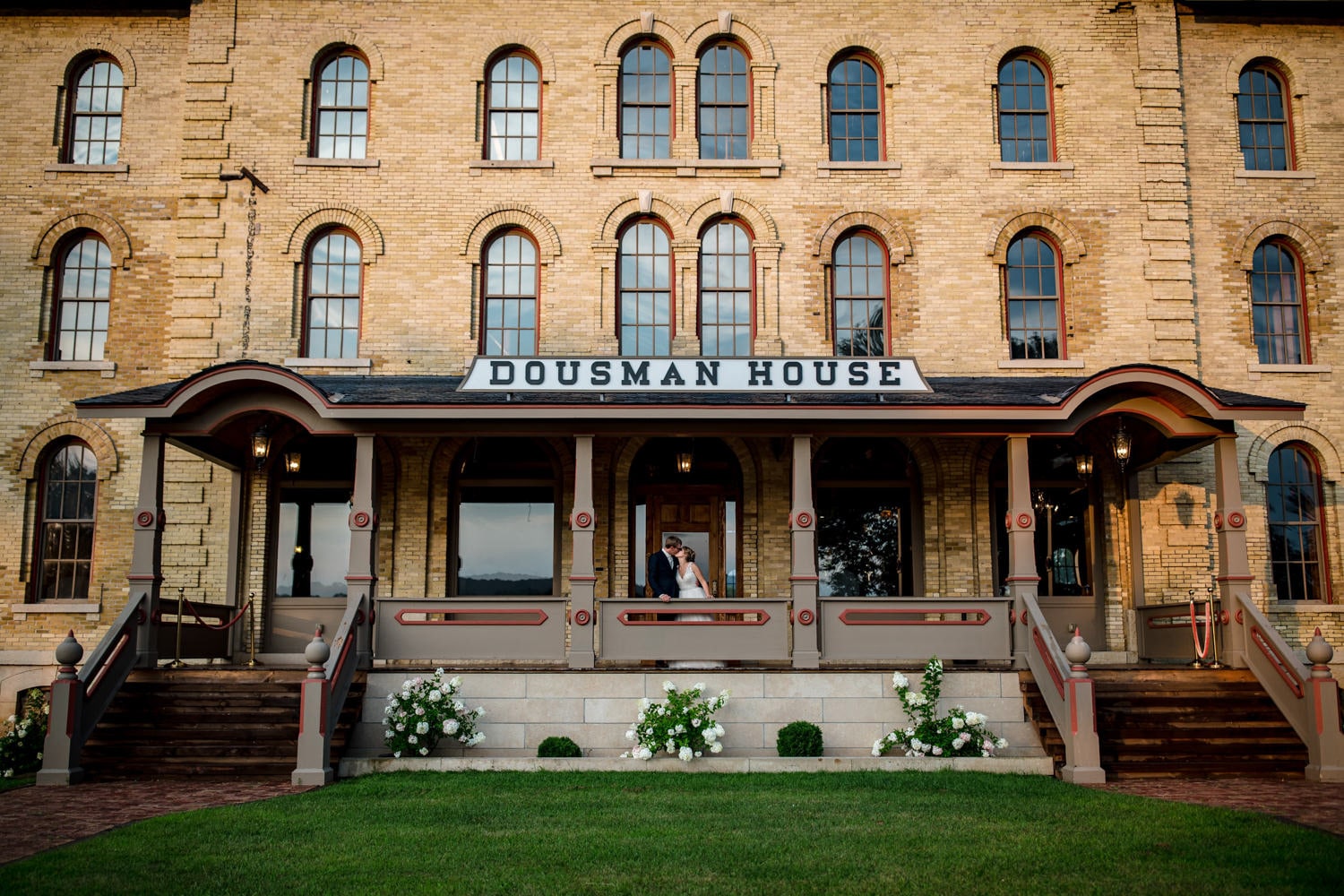 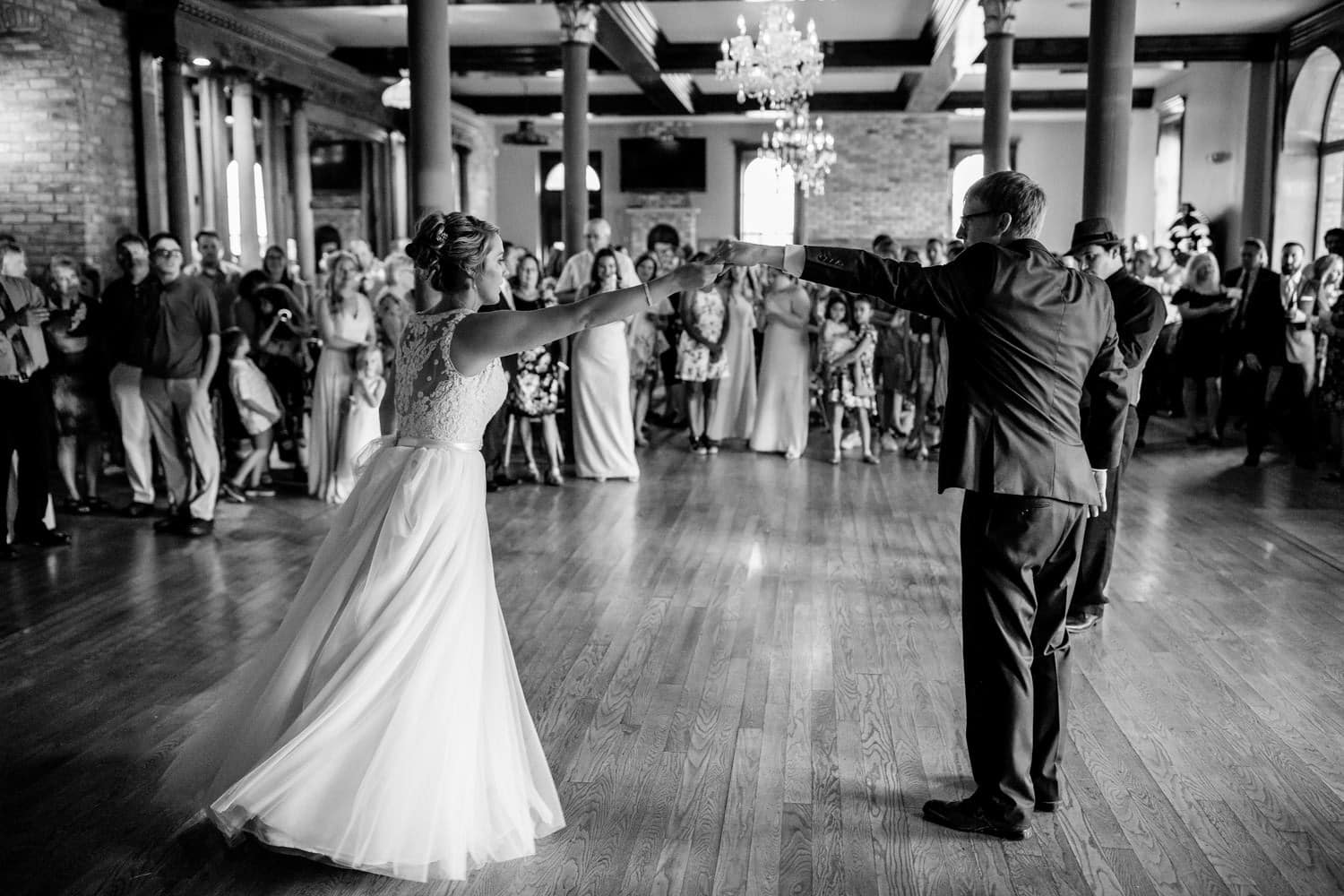 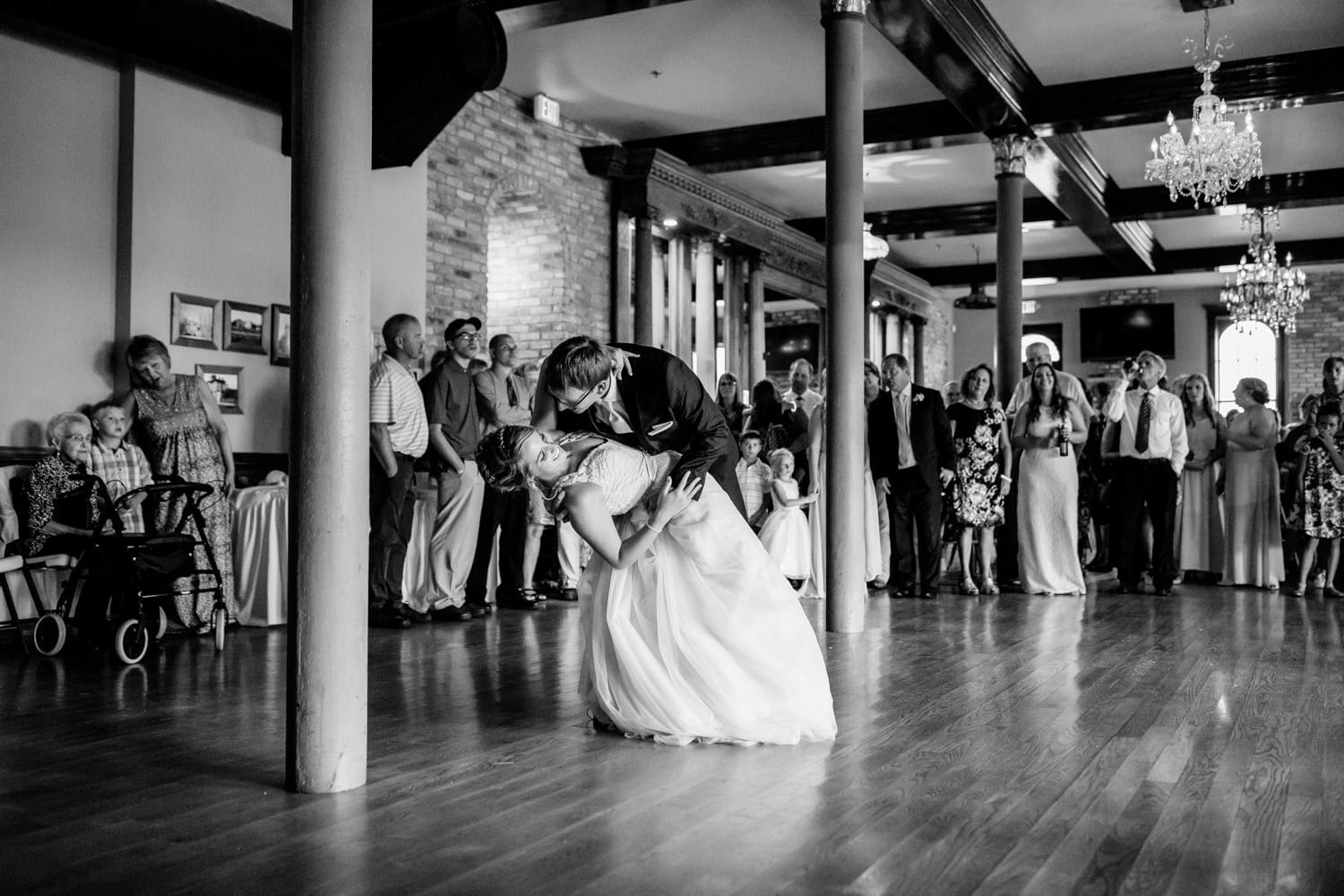 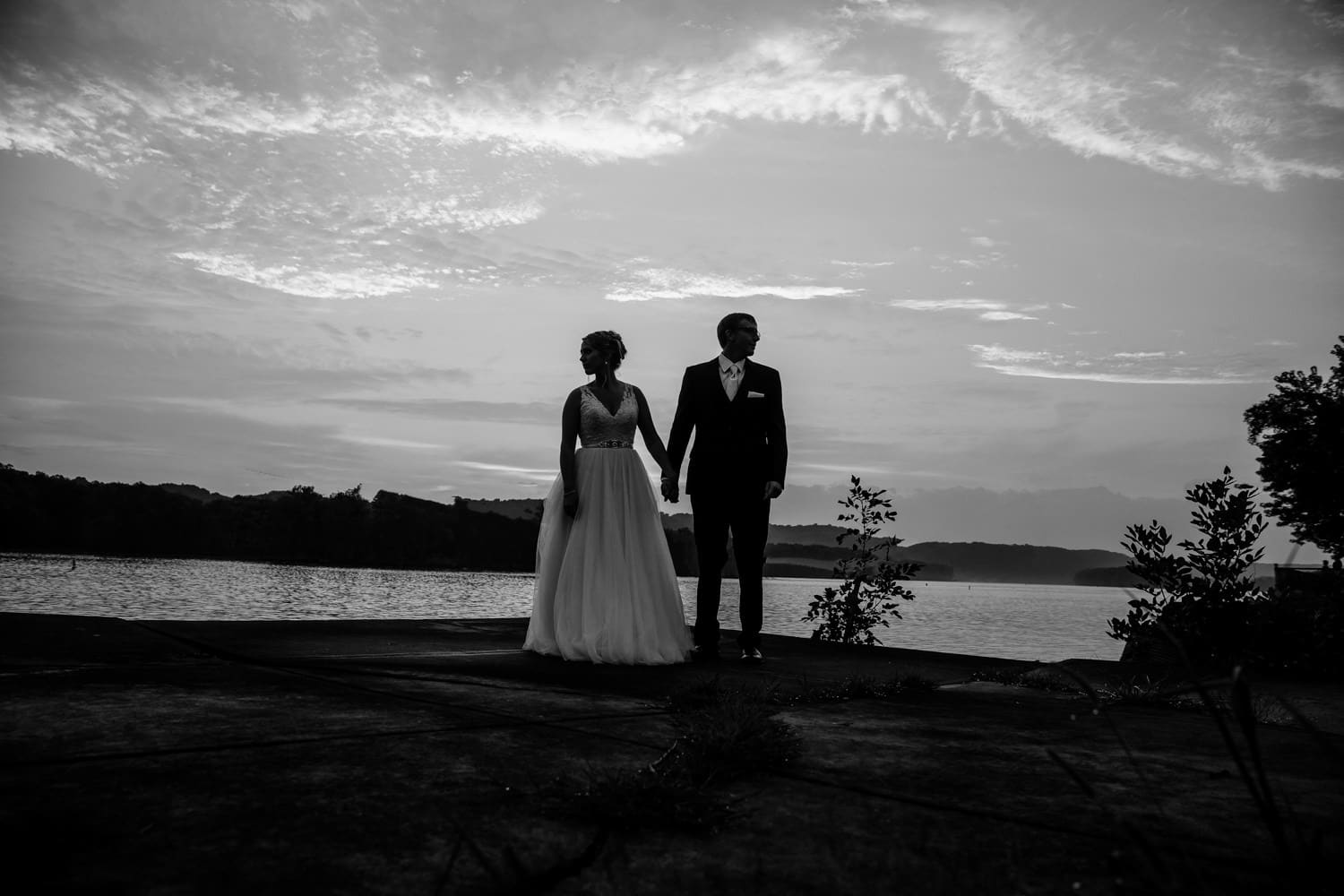 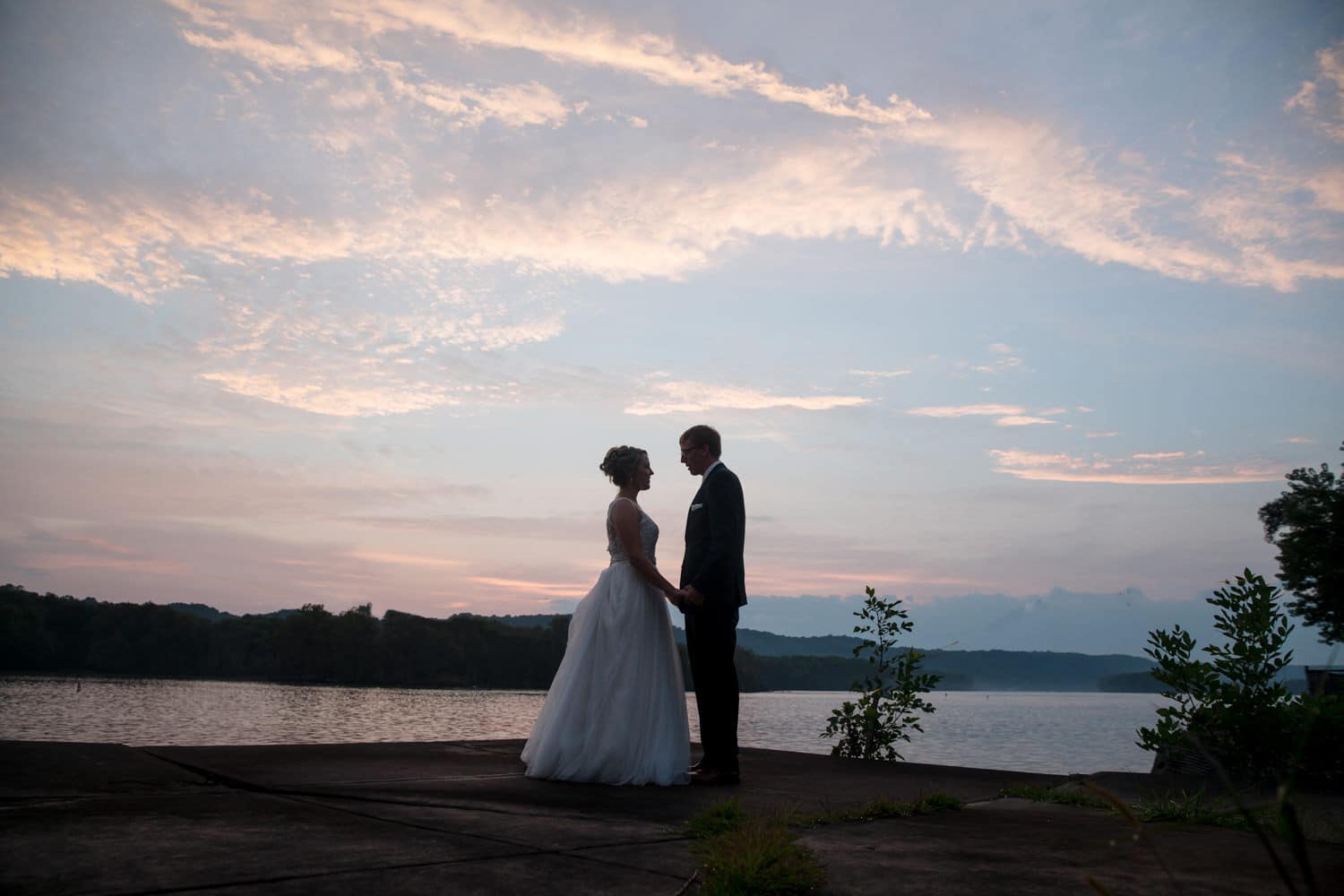